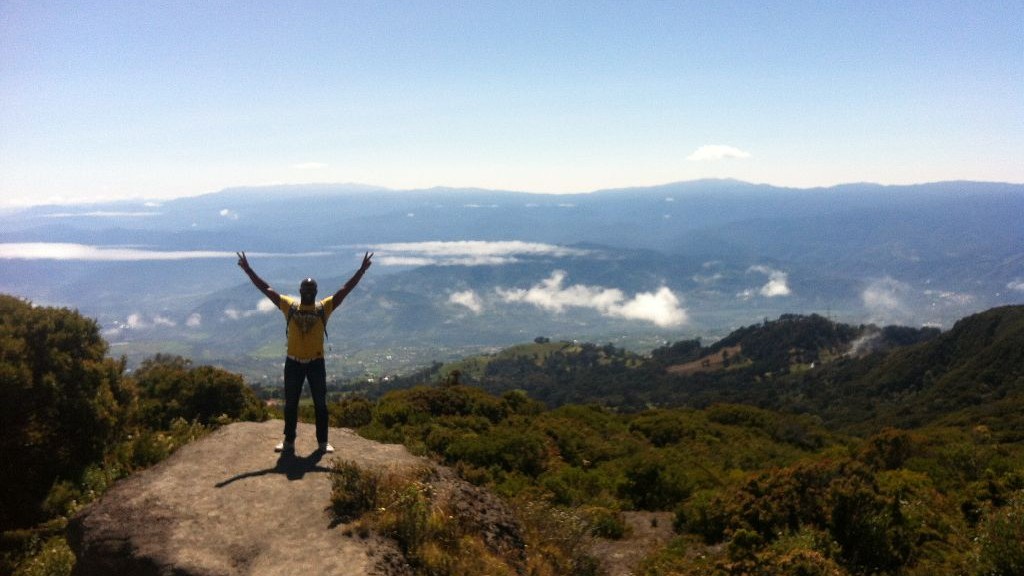 The Irazú Volcano is the highest active volcano in Costa Rica. From the top it is possible to see both the Atlantic and Pacific Oceans on a clear day. However, such clear days are rare, and the volcano’s summit is usually cloud-covered. So was mine.

This morning I went to the Irazú Volcano. I was told that everyday there is only one bus heading for the volcano that departures around 8 a.m. somewhere near Avenida 2. Because this is my last day in Costa Rica I had to make it happen. And also I heard that if the bus is full the bus driver just leaves the remaining people behind. Sounds like a mission from Lord of the rings. “To reach Irazú go to the shire at Avenida and wait for the… ” well, you get my grip LOL. Ok, but to be honest I could’ve just taken a tour for $ 99,- but then you pay for the taxi, the spanish guide and a translator for the spanish guide. The bus is just $ 10,- Yeah and I’m crazy harry ;-). So I got up really early and got in the city. After being shown in the wrong direction for three times I noticed this huge crowd just alongside a street. The first person I asked confirmed that they were indeed waiting for the bus to Irazú. I had to wait in back of the line and kind of gave up all hope that I would make it in to the bus, because the number of people in front of me could fit in two busses. But my name wouldn’t be hope-a-lot if I didn’t kept waiting. Luckily I did. Miraculously we all fit in the bus, which picked us up at 9:30 am. After a one and a half hour trip we arrived at the volcano. I had two and an half hours to explore the sights and to make a 2 km walk uphill to the crater. The hill was steep and the air was thin.  So I was a bit gasping for air. I also noticed the high air pressure when I opened a tube of lotion and all the lotion just sprayed out. Wow! The volcano was ok. It felt a bit like a B.K. experience. When you look at the double king size Whopper you just ordered, it looks far from the juicy Whopper on the picture behind the counter, but still it tastes ok. And to be able to stand near a crater that had been erupting hot lava just decades ago is something I’m grateful for! This one wasn’t even on my bucket list, but I put it up there, just to score it out. ;-)

Tomorrow up to Sao Paolo!!