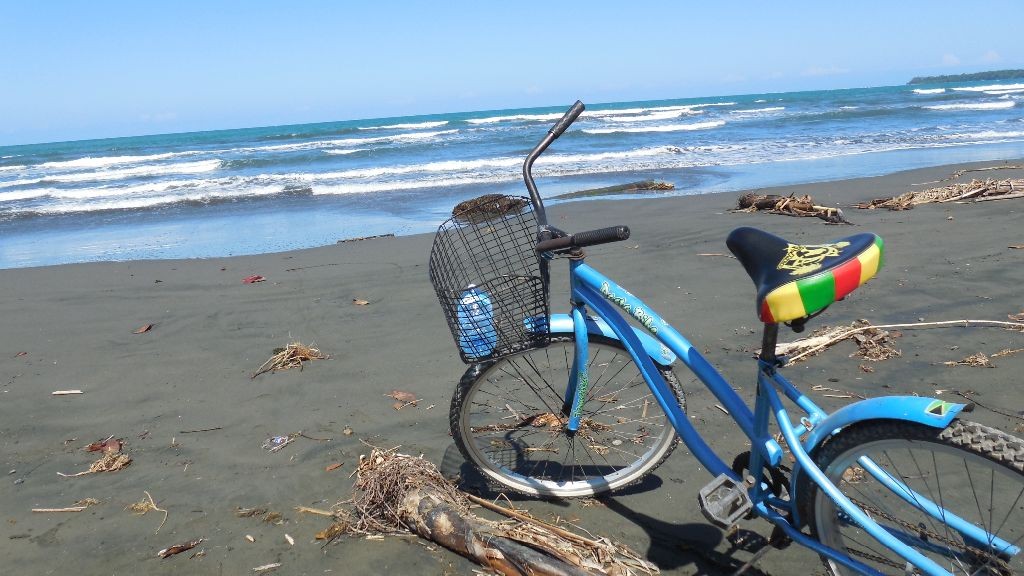 Cahuita is something else man! I arrived in Cahuita on the 26th of January to stay there for just two nights and then return back to Puerto Viejo. I ended up staying there for five days! Cahuita is like the Jamaica of Costa Rica. Rastafarians who say “Bless ya!” as they great you on the street. Reggae music bumping out of speakers on every street corner and there are bikes everywhere. I decided to rent one. When I asked for a lock for the bike the owner laughed at me: “No man, nobotti gon’ steel a bike aroond eer!” he said with a Jamaican like accent. Nough said! :)

I went hiking in the Cahuita national park, which I liked even more than the one in Manuel Antonio. I stood at Punta Cahuita which is really the tip of Costa Rica giving you a view of the Caribbean sea. Check it out on Google Maps.

Cahuita is a real small city. You can walk the whole center in like 10 minutes. I think many people would call it boring, because there is little to do, but for me it was just what I needed. I enjoyed strolling around and eating the local dishes like Casada, Chifriju and Red Snapper Fish. One day I bought some vegetables: potatoes, tomatoes, unions and avocado from the greengrocer on the street and prepared my own meal with all the primitive kitchen tools at hand. Loved it!

I spent hours and hours laying in the hammocks on the hostel veranda. Sleeping, reading, surfing or just chilling. Super relaxed! There was one hammock however where the rope broke, leaving the female laying disillusioned on the ground. But after a day or two I discovered there was something else going on around here. Hence I introduce to you: “The sabotage squirrel!” LOL.

Each time the hammock was secured, the fellow seemed to nibble the rope, thus sabotaging the hammock. We all had a good laugh about it. What an evil squirrel ;) How in earth can you come up with something like this. I don’t see no incentive for the squirrel other then defending his or her habitat. And if so, what a smart squirrel it is!

The owner had a big dog called Scooby Doo and a few cats. And in the evening when I was planning the rest of my trip sometimes two of the kittens accompanied me and played in front of my laptop.

I rediscovered Reggae and learnt to appreciate Tabasco sauce. I really liked it here! So relaxed, but the trip must go on!

The day before I left we saw a sloth next to the entrance of the hostel. Everybody came outside to witness the sloth pass by. And they are quicker than I thought.

Today I arrived at a new Hostel. This one has even got a pool!

I reached a milestone in a long time. My todo list contains only 3 items. People who know me, know how epic this is. It’s like saying: Today there are only thousand people living in India! Now lets go for an empty one!