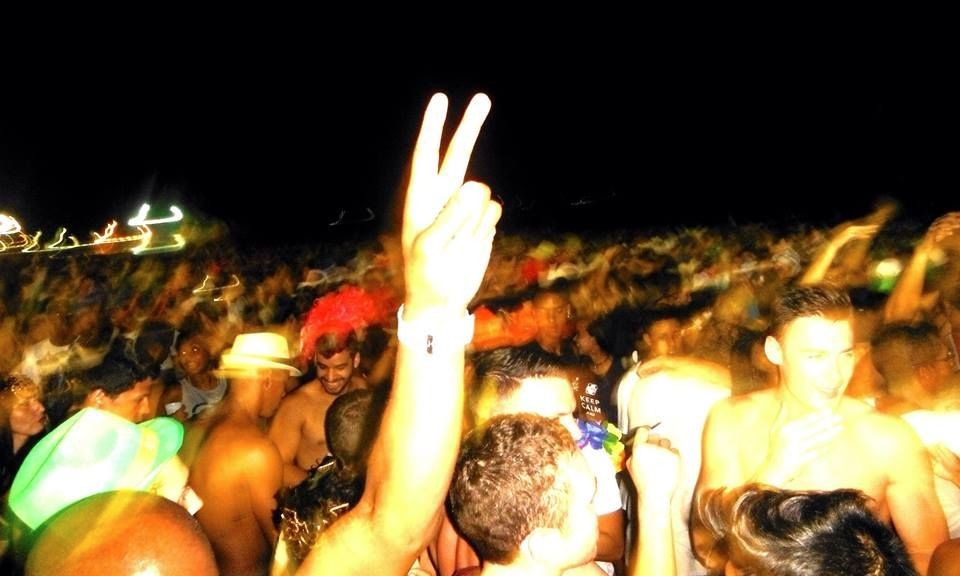 Fortunately I moved to another hostel in Botafogo, much closer to the beach. I had to pick up my fantasia (samba costume) at the same day as my checkin with the new hostel. This would mean I had to carry my backpack, daypack and the fantasia. The instructions for the location where again a bit vague, but the taxi driver managed to get me there. I checked the street name and street number and paid the taxi driver. However there was no sign of life at the address. Only an iron door. There I stood with all my belongings, in a strange neighborhood. My first plan was to fetch another taxi to the hostel, because I didn’t trust the neighborhood. Then suddenly the iron door opened and a woman waved me in. The door was immediately closed behind me. I saw a shack full of fantasia’s. Now I understand the caution. I recalled a fire in three Sambaschools back in 2011 destroying all the costumes. Investigation could not point out anything. The rivalry between the schools is harsh. A guy asked me if my name was Francis. (That’s how all the Brazilians call me. At one point I stopped correcting them ;)) I nodded yes and then he started picking all the parts of my fantasia together. The name of my fantasia was “Energia Eólica”!!! Yeah baby! Luckily I insisted on trying the complete fantasia before I left. The guy hated me for that, but I insisted. And luckily I did! Because I found out that the trousers where too short, the shoes too small and the sweater too large. We tried and tried until the outfit was ok. I stuffed a taxi with my backpack, daypack, fantasia with the windmill scepter hanging outside the window. Up to the next hostel! Hahaha

In this next hostel I met this crazy and cozy group of people with whom I would hang out the remaining days in Rio. I also met…. Ozz the hostel dog. When I first arrived in the hostel I told the owner that he was a cute dog. The owner answered: “He is the devil”. The owner was right. ;-) Hahaha I don’t like dogs, but this guy is another story. He ruined everybody’s life in the hostel, but still we loved him. The owner of the hostel found him on the streets of Brazil, so he must be gangster. ;-) At night he went through all our stuff. A bag of cookies, socks, sneakers.. nothing was safe, but we forgave him, because he was Ozzy.

The whole city was breathing Carnival. Before this I thought it was quite calm in the city. But now all over town there where these blocos, Brazilian block parties with live music, lot’s of people and Caipharinas. It was a sport to get to the best and most secret bloco to later brag that you had been there. Through an acquaintance of a guy at the hostel we heard about a bloco at Santa Theresa. We had to take the metro, go up the hill and on top of the hill we suddenly saw hundreds of people. Crazy!!

You also had blocos along the strip of Copacabana which were more like beach parties with pumping dance music. And again my Anderson Da Silva image didn’t leave me alone. One drunk guy pointed at me and shouted “Da Silva”. His friends quickly followed and surrounded me, shouting Da Silva. Before I know it, more people on the beach followed and I was jumping up and down with dozens of people all chanting my name, which off corse isn’t mine. Well it got me free beer though! ;-) Crazy experience!

We also went to Lapa, the real party district of Rio with loads of bars, clubs and blocos. We took the metro and missed the stop. Then we took the metro back, focused, but missed the stop again. After the third time we were told that the stop is skipped, because it is out of order, but we could get there through a special pathway by getting out at a stop before and walk. Felt a bit like the secret doorway on the Harry Potter train station hahaha. I loved Lapa. Great atmosphere, crowded, samba bumping out of the speakers. We even went to a real Hip-Hop club, where they played real good Hip-Hop music and the local Brazilians had great dance battles. We also went to the Escadaria Selarón staircases, featured in the 2002 “Beautiful” music video by Snoop Dogg feat. Pharrel Williams. The picture there started as a picture of our little group, but through some energy more and more people wanted to get in the picture. We ended up with everyone on the stairs screaming: Cheeeese!!!

We partied for more than four days in a row. Even when you are tired, Rio gives you the energy to keep on partying. One day I decided to take it easy and just go to the supermarket to buy some food. I ended up in a bloco right across the supermarket and before I know it, I got sucked in to the Carnival again. Though the city gives you this natural energy, a little help from an energy drink now and then is not that bad Hahaha. I soon learned that if you order “Redbull” they have no idea what you are talking about until you pronounce it like “HedgeBully”. This resulted in awkward conversations like… Me: “I would like a Redbull!” Bartender: “A what!?” Me: “Redbull!” Bartender: “I don’t understand” Me: “A HedgeBully!!!” Bartender: “Aaaah, ok!!” Seriously!? Lol

It wasn’t only party. At one time we did a nightly work out on the beach. Again a mini ghetto workout ;-)

I try to speak as much Portuguese as I can. Even have full conversations in Portuguese. Some Brazilians want to learn English. Then we will switch to English. But all in all, my Portuguese is improving. I reached a new Milestone: I successfully helped to translate between an English speaking guest and Portuguese speaking staff at the hostel.

When I tell people I’m from the Netherlands, they immediately refer to Seedorf. They literally love him there! I once asked a janitor, who was surveilling a house, for directions to a party. We got to talk a little and he told me that Seedorf used to live in the house that he was surveilling and that he saw him go in and out every time. He is legendary to Botafogo. It makes me proud! Carnival is on it’s way…. I can’t wait.. can’t wait!!!