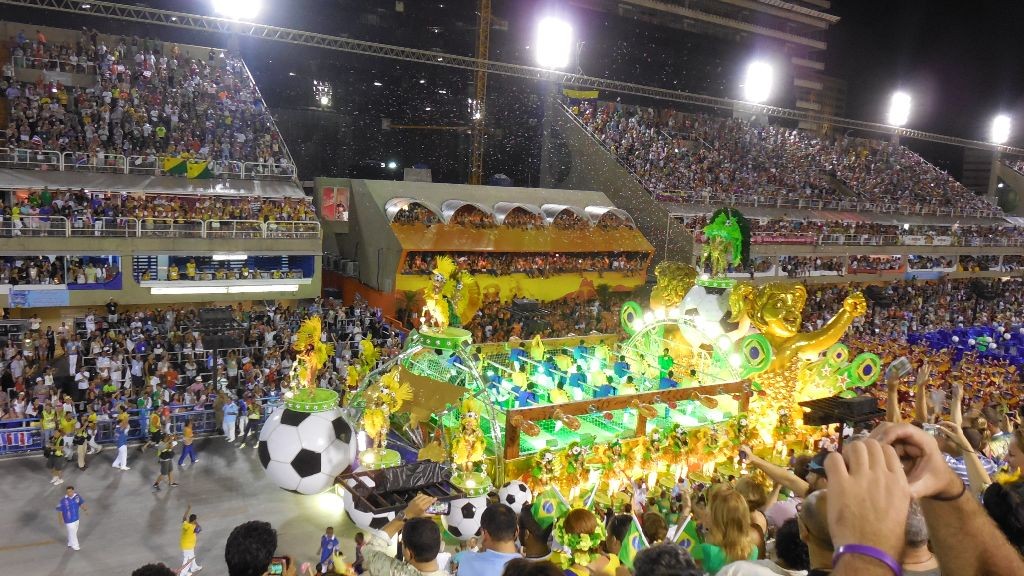 Then there was the big day! I had to be at the Samba Drome at 11 o’ clock in the evening and would be parading at night from 1:20 to 2:00. I had to get out at the metro station “Praça once” and would be in sector 6, ala 27. There I would find the concentration. The concentrations is the line you wait in before you enter the Samba Drome. I took a shower, dressed up and took the headpiece and some other large parts of the fantasia with me in a large, plastic bag. I took a taxi to the metro station and was on my own from there on. I saw a few other people also dragging a large, plastic bag with the larger pieces of their fantasia. People like to talk with you, because they know you are going to parade. Off course everyone spoke to me in Portuguese, to find out that I was sort of a gringo. Hahaha. I arrived at the concentration and needed to use the toilet. Believe me, it is hard to use the toilet with your fantasia on and especially a public, plastic festival toilet. I had my all-time favorite sunglasses stuffed on my waste and forgot about them when using the toilet. They *plop* just fell in to the awfully dirty water of the toilet. Can you believe that I loved these glasses so much, that for a split second I had this crazy thought of fishing them out. Only a split second though hahaha. Ah well, you win something, you loose something as long as you win more than you loose, you’ll be ok.

I met dozens of people with the same outfit. Must be my formation. We helped each other get fully dressed. The atmosphere became more tense as we lined up in the concentration. We also got introduced to our director. Each sector has it’s own director, telling you to go slower, faster, stay in line, stop etc. We wait for hours in the concentration, like caged bulls wanting to get out. Then the first section of our school hit the Samba Drome. Each entering of a school is heralded with a large firework show. I was in section 6, so it would take a little while before it was our turn. The song of the school started to play in the Samba Drome, we could hear it from far, together with the fireworks and all the people in my section started to hum along with the song. That was a beautiful, meditative, intense moment! Then I suddenly realized where I was: About to enter the great Samba Drome with thousands of people for the Carnival 2014! I got in my zone. Bam! And there it started… my sector was moving, we danced, I could hear the music getting louder and suddenly I was surrounded by loud drums, cheering people and beautiful colors. The director started to yell directions. My section was horrible at making a straight line, he got frustrated and we almost gave the director a heart attack. Eventually no one even listened to him and just enjoyed their moment. We absorbed the energy of the crowd and danced like there was no tomorrow. I completely got in my role even caught myself, giving hand kisses to the audience and do the queen wave. Frans!? Really? Hahaha. Instead of 1:20 we had left at nearly 3 o’ clock and the walk took like 40 minutes, which felt like 10. My pants were constantly sacking, because of my samba moves, but that couldn’t stop me.

After I left the Samba Drome I was full of adrenaline. A dutch couple wanted to make a picture with me, thinking I was Brazilian. I heard them speaking in Dutch and understood everything they said. They didn’t knew that. “Pak jij de camera dan!” “Waar is dat ding!?” “In je tas, in je tas!!” “Schiet you op, straks loop tie door. Vraag die vent dear om een foto the nemen!” I kept my mouth shut, until the flashlight hit and the picture was made. “Staan we er goed op?” I asked them in dutch. Hahaha. They were completely shocked and couldn’t believe I was from the Netherlands and got to walk with the parade. And I thought to myself yeah… I freaking did it! One more off my bucket list ;-)

That night I returned to the hostel. Took of my Carnaval outfit and went to sleep with a smile. The next morning my whole outfit was spread across the room. Ozzy the hotel dog, paid us a little visit! Lol