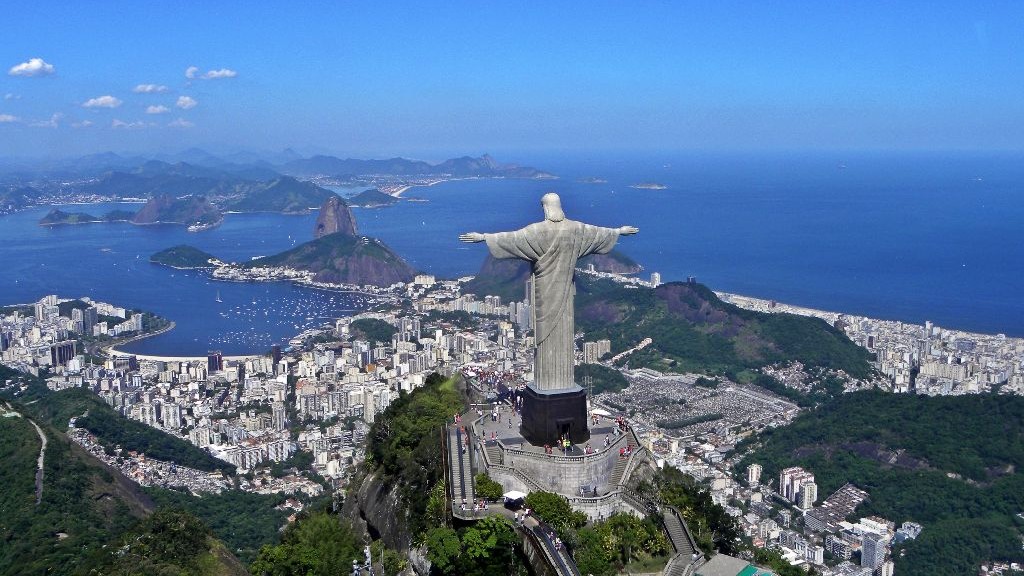 I arrived in Rio de Janeiro the “Cidade Maravilhosa”! At the bus station I had to wait for a taxi for almost an hour. This was an inverted world. Normally the taxi drivers flock around the potty, arrived, fresh, new tourist meat. This time around we all had to get in line and wait for a taxi to pick us up. My taxi ride was right through the Sambadrome, the big open air stadium where the Carnival parade takes place. They were busy constructing it all, so now cars can just drive through. It is on these grounds, that I will put my samba feet to an ever during Samba festivity. (Ok Frans, a bit too much LOL) Later on I went to the Sambadrome to see the Samba museum. Unfortunality it was closed, but strange enough I could just walk in de midst of the Sambadrome construction, without a helmet. The place was packed with construction workers. I really got to see the Sambadrome under construction. This is unthinkable in the Netherlands!

In Rio I booked two hostels. The first hostel is called Corcovado Hostel and I could have guessed it, but it is right at the foot of the steep Corcovado hill which holds the statue of “Cristo Redentor” on top. I could see the statue from within the garden of the hostel which is really nice, but the hostel was a 40 minute bus ride away from the city center with all the beaches, the restaurants, the clubs etc. and I had to make a 10 minute walk to the bus station. And on my return this 10 minute walk would take 20 minutes, because of the steep hill. Good exercise though! Even despite all this I liked the hostel. Nice swimming pool, music and the owner, a former Shell employee, ran the hostel with his sons and nephew. I kicked it off with the guys a lot. Here I also learned about Havaianas, the famous flip-flops from Brazil. The word actually means flip-flop in Portuguese. I didn’t know about them, until I looked at my feet. I was wearing Havaianas. Lol.

Brazil is famous for it’s fruit juices, which are called Suco. And now I know why. I got addicted to them. Name a fruit and they have a juice of it. You can even mix random fruits and add some mint or ginger to it. I loved the watermelon juice. The name of the fruits were in Portuguese. And because I don’t know all the names, I sometimes randomly chose the names I liked the most and then get the surprise. One time I had a really sour, unrecognizable juice. But that is part of the game Hahaha. I also liked Açai, which is a berry that they use in a lot of things from juice to ice-cream.

When I went to Rio in 2010 the “Cristo Redentor” was under construction because of a flood. Back then I knew I would come back. And so I did. I went to see the Cristo. After purchasing my ticket I had to wait in this room with pictures of the Cristo, Rio and other attractions hanging on the wall. There I experienced the best example of NOT living in the now. A guy taking a picture of the picture of Critso hanging on the wall. Wow! A little train brought us to the top of the hill, accompanied by a live samba band. At the top I had to fight with all the other tourist to take a picture, without someone having their arms, head or feet in your picture. The Cristo was spectacular, but more so because I realized that I was standing next to the statue that symbolizes the beauty of Brazil and especially Rio de Janeiro. This was the statue I admired in many images, pictures and even my computer desktop and now I was there! Finally!

The people are also nice here. One time I was in the metro holding a plastic bag with some flyers and other non important stuff in it. The bag was a bit torned. The girl and guy from the hostel I was with, pointed it out and told me that my stuff was almost going to fall out of the bag. Then an old woman sitting next to us took something from her handbag. It was a new plastic bag, for me. If that ain’t sweet?

The day of my parade was coming closer and closer. And then I got a mail from the school that I had to be at a test on Sunday at eight o’ clock in the evening, next to the Red cross building. How vague can you be? I took a taxi and asked him to drop me off next to the Red cross building. Fortunately he knew it. The taxi driver was a nice guy. He stopped at the Maracanã stadium to took some pictures of me and explained to me what it was. I did not know that it was a famous soccer stadium. When I told him about my parade and that my school was “Salgueiro” he got really excited. He even gave me a CD right out of his CD player with all the songs of the samba schools, so that I could learn the Slagueiro song.

I arrived at the block and saw a huge crowd. A lot of people wearing “Salgueiro” t-shirts.There I understood the importance of the schools for the people. You breathe a certain school. Some people grew up with the school. It is kind of like the soccer teams, but without the aggression. And then the batteria (the group of people forming the drum section in the carnival parade) kicked in! It was really awesome to see how the directors instructed the batteria and the amazing sound it produced. I also got to find out, that the test was a test for the batteria and not for me. Pfieeeuw!! Hahaha. I had a lovely night and got a taste of my school. I’m in crowd now ;-) and ready for the real work! Samba de Janeiro!!!!