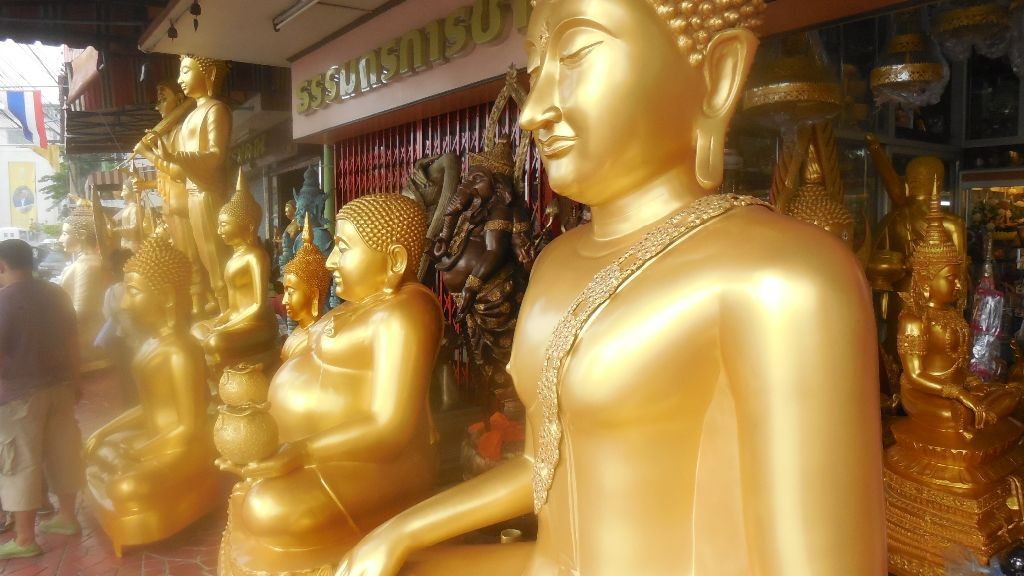 One day before I arrived in Bangkok the curfew was completely lifted all around Thailand. I arrived at this beautiful hostel. Nicely designed, with a pond in the lobby and a huge dartboard on the second floor. I put down my backpack and connected to the internet to get the result of the Netherlands vs Spain match. My last update was “0-1” for Spain, so when I saw the score of “5 – 1” I couldn’t help but make a loud sound Jeeej! Hahaha. How on earth was this possible!!!?? I quickly checked the match highlights. Unheard! During my world trip, I’ve been asked a thousand times, which country I live in. When I replied the Netherlands, the subject normally immediately switched to Amsterdam. After this day, the subject switched immediately to the 5-1 match. I only had to put my two hands in the air, 5-1 when people didn’t quite understand where I was from and they would say: “Ohh, Hollaaanda? Great match!!” Hahaha

I stayed in Bangkok for two days and I must say it rained pretty often. I took a taxi to the center, because I wanted to eat some insects. It was on my bucket list. But it was hard to explain the driver to bring me to a place where they sell insects. I asked for a pen and a piece of paper and even drew some bugs for him and made eating gestures. He looked at me like I was explaining politics to a five year old. Then eventually I drew a comic for him. It took me some time, but he looked at it fiercely and than he smiled, he understood. Jeej!! ;-) He brought me to this market at Khao San Road. There I saw a woman with a stand full of deep fried bugs, spiders and scorpions. “You want to try” she asked me as soon as I looked at the horrible things in front of me. My mind said: “Nooooo”, but somehow my mouth said: “Yes!” There I ate a maggot. People who know me, also know how much I like insects hahaha #beingsarcastic. So shivers went all over my back. The taste was quite ok and it was just crunchy, but still… it was a freaking maggot! All the way I kept on tasting the maggot in my mouth and I just couldn’t get rid of the taste.

My photo camera still had a little bit of fog in it, because it got wet at the Full Moon Party. This explains the fogginess in some pictures. Hahaha. The water will evaporate in time I guess. :-)

I decided to go and eat something at a terrace to get the taste away. At the restaurant there was an older man sitting with a woman. He looked at me and greeted me warmly. He invited me to their table. “Come and sit with us my brother”, he said. The woman seemed to be a local and was knitting wrist bandages. He was drinking beer and seemed to be having a good time. I ordered some soup. Then someone with a whole bunch of scorpions came at our table. If I would like to try one? Why not, I already ate a maggot. Suddenly I felt all the eyes at the terrace focusing on me, while I was trying to muster all the courage I could, to eat the scorpion. I looked at the black scorpion on the stick in front of me. It was real, it was black with a red glow to it. It was horrible. Then I cleared my mind and put the whole scorpion in my mouth. The only thing I knew I had to do was chew as if my life was depending on it. I chewed like there was no tomorrow. It was crunchy and it had almost no flavor. I swallowed and tears came out of my eyes. I freakin’ did it!! I ate a freakin’ scorpion. Everyone applauded and then I started to act though. Hahaha, pushing the guys at the other tables to also try it. Hahaha. Yes, like they say courage comes afterwards. I had a little chat with the brother. I asked them how he and the woman knew each other. Seemed that they didn’t know each other. He just sat down at her table a while ago. He then bought a bracelet from her and she excused us and left the table. Then the story started to get even stranger. He started to tell me that he was a teacher without work here and that he needed money for his hotel only to stay one more night, otherwise he had to sleep on the streets. All my alarm bells started ringing fiercely! And then he started to get emotional, tears coming out of his eyes. So please brother, will you help me. The only thing I was thinking about, was: What if! What if this was really a man in need? But as soon as I placed my self in his position I knew this story stank. I looked at his gold watch. I said: “Is that a real gold watch on your arm?” Surprised by my sudden question, he answered: “Yes it is” and then continued his moaning. “So please brother, can you…” “Well, if I was you and was really that deep in trouble, I would first switch from a hotel to a hostel, because its cheaper and secondly I would also try to sell that watch. “Listen brother”, I said “I ain’t stupid! You get a beer from me, but that’s it.” I paid for my food and his beer and left.” I saw a slight grin on his face, saying: “You got me, brother”. His cover was blown. What was he thinking!? Hahaha

I also visited Wat Pho, the Lying Buddha. This immense gold, lying Buddha was really impressive. Also on the sole of it’s feet, there are ancient scriptures. All this time my big and my little toe where far from perfect. I had to go and replace the bondage now and then at a local hospital, but still, these two guys were not going to stop me from exploring hahaha.

Some drivers are funny though. They will ask you if you want to see a ping-pong show. Well… no.. sorry! Hahaha. People at the hostel already prepared me for this. If you don’t know what a ping-pong show is, google it, or better yet just leave this one. Hahaha

In Thailand people greet with a wai, which consist of a slight bow, with the palms pressed together in a prayer-like fashion. Even the “Ronald Mc Donalds” clown in front of the shop is making a wai. They really adjust to each culture.. Hahaha.

One evening I took a Tuk Tuk back to the hostel, because the vending machine at the hostel wasn’t working. I decided to go at the supermarket across the street nearby. But when I left the hostel I saw that the street was completely put off by heavily armed soldiers and no smiles. I was allowed to walk to the supermarket. A thought of making a picture came rapidly in to my mind, but left my mind with that same speed. These guys were no joke, this situation was no joke. No time for funny things. I walked past them, while they clearly were keeping an eye on me. In principle I could be anyone, even a possible threat. I bought my water and neatly returned to the hostel. Wow!