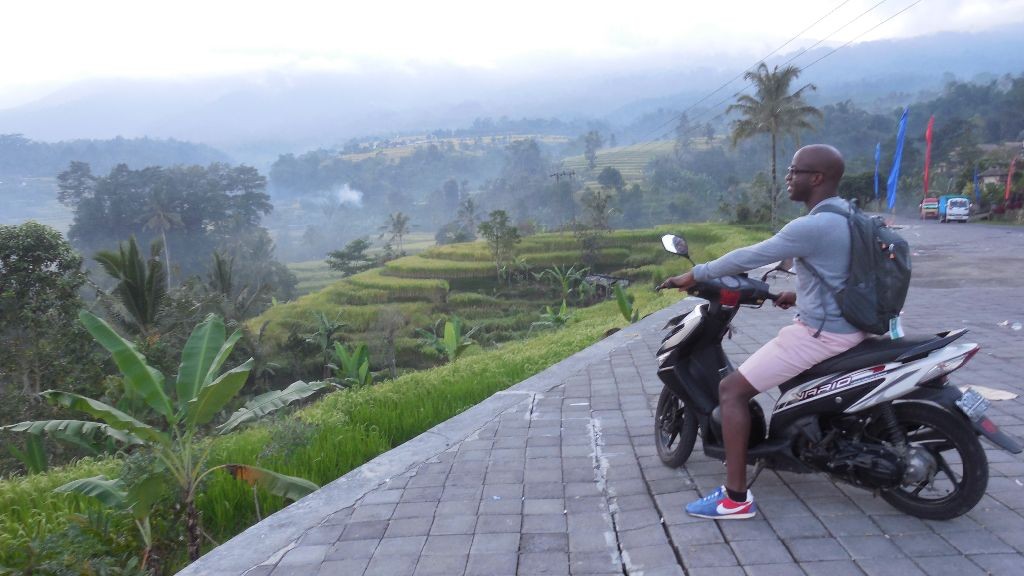 I left the crowded, touristic Kuta for Ubud. Only after I decided to go here I found out about the famous Eat, Pray, Love movie with Julia Roberts that made Ubud extra famous. They even have the Eat, Pray, Love trail, of which I still don’t know what it is. I watched to movie though. :-)

Like Kuta the streets of Ubud where also decorated with Penjors, but clearly more authentic ones than the ones in Kuta. Again the smell of incense, delicious food and burning compost hugged my nose. And at some places you are also surprised by the smell of clove from the kretek cigarettes. The serenity was special. I got myself a map and decided which places I wanted to visit the next couple of days. I plotted them on the map and talked to the guy from the guesthouse. He looked at the dots plotted on my map. “You can take a tour, but then you won’t see them all, and you will be bound to a strict program. You can also go with a private driver. Than you can see them all, but it will cost you way more.” “Is it possible to do it by myself with a scooter?”, I asked. “Yeah, sure! For example from here to the Git git waterfalls is only 2 hours driving or maybe a bit more” I don’t know why none of the alarm bells in my head went off, but it sounded quite doable. Me on a scooter, without GPS, only a paper map. Hahaha. If I had only imagined me driving on a scooter in Holland from Rotterdam to Groningen, I would have put this idea straight out of my head. But not then, not in that place, not in that time. I decided to go for the adventure!

I wanted to visit the Mengwi Royal Family Temple, the Jatiluwih Rice Terraces, the Git Git waterfalls, the famous Banjar hotsprings , the beautiful Munduk area and Bedugul, with the Pura Ulundana Beratan Temple in the lake. A total of maybe 5 hours driving, but I would split it up in two days.

I packed my little day pack with swimming clothes, camera, cash, snacks, water, a vest, a map and more handy things. I was excited. I loved it! Driving the scooter alongside this beautiful landscape gives you a real sense of freedom. However I couldn’t even find my first stop, the Mengwi Royal Family Temple. After asking a few people I was lucky one guy offered to drive me there. I just had to follow him, but that wasn’t as easy done as said. He was a seasoned driver, overtaking trucks, pushing our bikes between cars etc. I managed to keep up with him, but more so I understood why I didn’t find it. We went uphill, downhill, in to an alley, on to a large road, went left at a rice field, through a village then back on a main road… like what!!? And suddenly he pointed to the right, there it is! I thanked him, locked my scooter and enjoyed the Mengwi Temple. Next stop were the Jatiluwih Rice Terraces. It was already getting late, and I had only done just one stop. It became a race against the clock, because I wanted to get there before sunset. I drove and drove, and again. Impossible to find it. I asked a girl on a scooter for directions. She only spoke Indonesian, but she recognized the name Jatiluwih. She said something in Indonesian, which sounded like “Slamanplakat” and drove off. I was not sure if she told me to follow her, but it seemed like it, so I did. After only one minute she stopped and pointed to a unpaved road. With hand signals she explained me that I had to follow this road all the way to the Rice terraces. One thing that I have learned during this trip is to sometimes just don’t ask questions and just have faith. It was dusk already and I was hours away from my hotel and had no clue how to get back. But for now I was focused on getting to Jatiluwih before sunset. I drove the road which had a lot of curves in it and took me through some villages where people looked at me like a brown alien on a two wheel spaceship sweeping by. The road took for ages, but suddenly I saw this immense sight on my left side. Jatiluwih!!! I was there! I turned off the engine and enjoyed the now! Beautiful! Look at the picture of me in total calmness looking out over the Jatiluwih Rice Terraces. Little did I know about the quest that was lying ahead. Whooehahaahahaaaah ;-)

It was now about 6 pm and the evening was kicking in. It is known for a fact that it can get really cold on a scooter when the evening falls. Luckily I had my vest with me. I put on my vest, turned on the headlight of the scooter and started my journey back to the hotel. I don’t know how many times I said the word Ubud, but it felt like thousands. I would stop at a little shop and ask for directions, but I was pointed out in different directions each time. May be because they didn’t understand me, or I didn’t understand them. When I was driving for 25 minutes in one direction, another person would tell me that I was completely wrong and that I had to go all the way back and from there take another route. I started to ask people for directions every 100 meter, because I didn’t want to loose any more time driving in the wrong direction.

It also didn’t really help when people say: “At the traffic light, turn right” when they actually mean a traffic crossing without any actual traffic lights. So I kept on searching for actual traffic lights getting way out of route. Or sometimes they would say, follow this road all the way and then turn left. Not telling me about all the little side streets and curves in the road, that make you wonder each second if you should have turned left already.

At first the whole thing seemed quite funny and I loved driving the scooter. But I noticed it was getting darker, shops started to close and the streets where getting quieter and I still was really far away from my hotel. Also it was getting colder by the minute,

And then finally I saw familiar surroundings. I knew for sure I was here before. These were the roads I travelled when I left Ubud. I was exhausted but glad I was close. Relieved, I stopped again, happy that this would be one of my last times asking for directions. But then the guy I asked said: “Ubud!!? Pffiiiieeuw. You are ferry faw my friend. It is 1,5 hour drive from here!” This can’t be! I was sure he was wrong, but when two other people confirmed I felt a slightly despondent for the first time. And this is were I really missed my iPhone with GPS. Thoughts running through my head, may be I should try to find a place to sleep? But where? There was only road en some villages, most of them completely dark and empty because everything was closed.

Was this funny adventure going to turn out in a little nightmare? No! I got myself together and again followed the directions people gave me, hoping they were right. I also tried to use the map now and then, but it was useless, because I didn’t know where on the map I was at. But then a new problem presented itself. My scooter was running out of petroleum. The only thing I could do was keep on driving, hoping I will find some place to fill up my tank. Otherwise I had to sleep alongside the road with my scooter? Hmmm. The road was still dark and there was no real sign of life in some of the villages I drove through. I just kept on going, kept on going. And… there it was. A real town. There was a night market going on. I found petroleum within minutes and was happy to know that there still is some life in Bali. My hopes got up. I drove for what felt like hours. I came across a lot of temples, where I heard the typical Balinesian Gamelan Gender Wayang sound. Ceremonies were being held because of  Galungan. People gattered in the temples.

I kept on going and asking people for directions. And funny enough, even if the man I was asking for directions in an unknown village, in the evening, with almost no one in the street, was holding a machete, I didn’t felt unsafe for one moment. Luckily their predictions got shorter and shorter. “One hour that way..” “…Only 20 minutes from here”, “Like 5 to 10 minutes..” until.. “Turn back and take the first left, it must be there”. Jeej! And even though I was in the street, I only recognized it as soon as I saw the sign of the Guest House and man was I happy to see that sign. I made it! I finally made it! A whole load of pressure just fell of my shoulders. Now my hunger feelings dared to step in, which I probably was ignoring all the time. I drove to a nearby restaurant, and I would never forget how perfect the music sounded, how sweet the food tasted and how relaxing the cool breeze felt, which made the white lampions in the restaurant slowly wabble.

Eventually I only got to do two things on my loooong list. Guess I have to go for the private driver after all, but at least I have another memory in my pocket. Hahaha