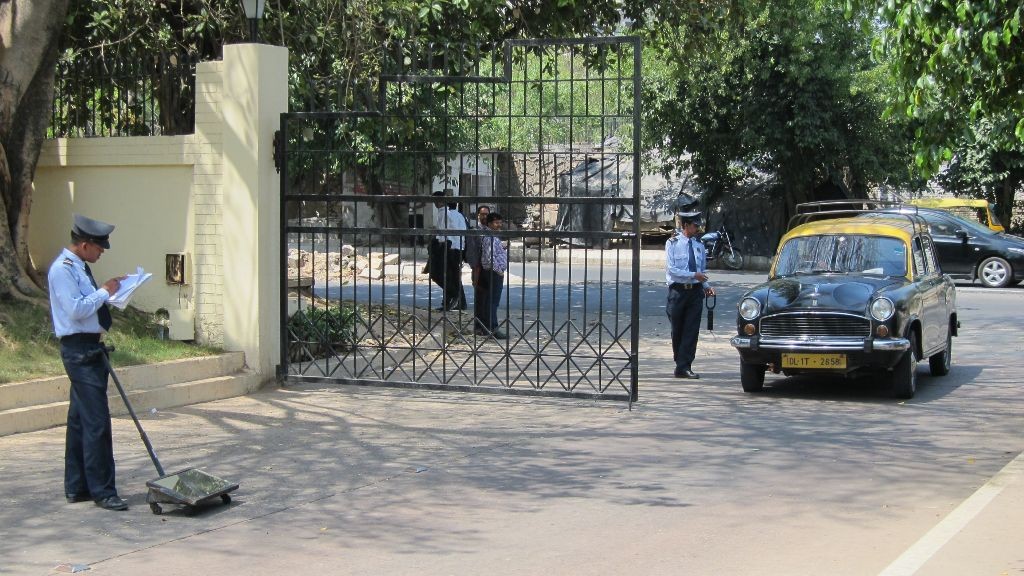 I arrived in New Delhi in the evening. Sander, a friend, who was going to join me for two weeks on my journey in India, would arrive at night. My plan was to check in at the hotel, where we already made a reservation, and pick him up later with a taxi. I took a trustworthy airport taxi, with a fixed price. After 10 minutes of driving, the taxi driver asked again for the address. I showed him my paper with the address on it. Suddenly he didn’t know where the address was, it seemed to be an incomplete address. He offered to call the Hotel for me to ask for directions. After a short Indian conversation he hung up saying the hotel was closed, all the bookings were cancelled because it was election time and of course he knew just the perfect Hotel for me. All my alarm bells started ringing!! I had heard about this scam already and wasn’t going to fall for it. I knew they where just trying to lure me to another hotel where they get some kind of commission. After I refused to go to the other hotel he offered to drop me off at the New Delhi Tourist information. My plan was to get a normal taxi there and get to my hotel. However at the Tourist information they told me te same story. I insisted to call the hotel myself, dialing the number my self. Only after I spoke to someone from the hotel confirming the story, I believed it. I went to their recommended hotel. Later on I picked up Sander from the airport with a taxi that was arranged by the Tourist information and everything seemed well. It was a bit strange however, that each time we tried to leave the hotel someone linked to the Tourist information was waiting at our service for us to guide us, drive us etc. We noticed every time we left, they informed the Tourist information and slowed us down with chit chat until someone from the Tourist information arrived. I listened to my gut-feeling and decided to send an email to our initial hotel, just for some extra double checking.

The next morning I got a mail back that they where open 365 days a week and that we were mislead by the taxi driver. Wow! We immediately decided to book a new hotel and get the hell out of this complot. However, things got ugly when we really wanted to get out. All sorts of people trying to get us back to the maffia Tourist information. When I wanted to check out we were offered a discount if we would go to the Tourist information and get a coupon. I thanked for the offer and said that I don’t want the discount. Then suddenly I could not pay at the hotel desk, only pay at the Tourist information. When I refused, the guy called the manager of the Tourist information and handed me the phone to talk to him. I explained I just wanted to pay at the hotel and didn’t need any discount. When the price of the hotel was suddenly increased by 1000 Rupies and he would only speak to the white guy, meaning my friend, I started to loose my temper. Like seriously!!!?? I stopped all communication, went back to the room, we booked the new hotel which would pick us up from there and took a chance by putting the initial agreed amount of cash on the desk of the reception and just walk out. Luckily no one tried to stop us. Guess we were convincing ;-) Hahaha I skyped the newly booked hotel with my iPad, still using the wifi of the old hotel Haha. A few moments later a taxi arrived to bring us to the new hotel. Completely paranoid, we didn’t trust it and asked if he knew the name of the hotel we where going to. He didn’t! Seemed our paranoia wasn’t misplaced. He was also in the complot and part of the Tourist information maffia. Finally our real taxi arrived and we got in to this over the top 5 star, swimming pool, spa, resort behind gates. Hahaha. We thought we deserved it! ;-) I later found out that we were in a wrong chain. A chain is a network of taxi drivers, hotels and tourist booking agencies that all work together. They try to lure fresh, new tourist meat in to there chain as soon as they get of the plane. There are some good chains though, we were just unlucky to start of in a bad one. And this is just the short version. Hahaha