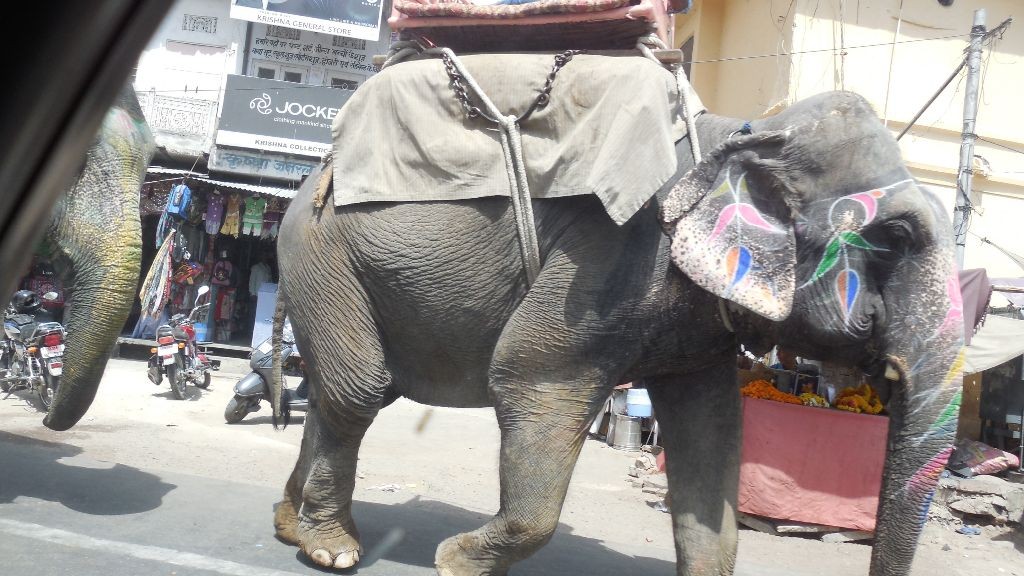 Out of all countries I visited untill now, India gave me the greatest culture shock. It is so complex, so diverse and really different from anything else I have seen untill now. First of all, it was hot, really hot. Between 40 and 45 degrees. It was dry season. Yellow green rickshaws trying to find their way through the heavy traffic. And in India unlike in the west they honk, just to notice other drivers of their presence. So you constantly here honks everywhere. Because of this they even introduced silence zones in some parts of the city, where it is prohibited to honk. Like wow! Apart from a rickshaw here and there, we did most local transportation by taxi. And don’t be surprised when suddenly through all this traffic you see a large, imposing, creature, slowly passing by. An elephant! And then a few meters down the way a camel. Indian music bumping out of the taxis’ shrill sounding speakers. The driver suddenly stops and tries to manoeuvre around a cow that is just standing in the middle of the road causing traffic, because of course they are holey creatures here in India. Even the Mc Donalds in India only serves Mc Chicken and Mc Fish filet. No burgers! Hahaha. Really! I found out when I tried to order and didn’t see any burger on the menu. Sitting in the taxi it is also a wonder we never had an accident. One driver was even ghost riding on a part of the high way in the evening, while we were sitting in the back looking at each other, like, is this really happening?

One time we were driving behind a truck with three black oxes, all squashed together. One was laying on it’s knees gasping for air, while he was squashed down by the other two and was slowly dying. It was a horrible sight. The taxi driver simply told us, that these where not holey creatures, because they were no cows and they mostly die during transportation. I’m no animal activist, but this is terrible! Like… wow!!

The city is very dusty and full of smog. So bad that when you make a picture at night using flash, you see the particles light up on your picture. The streetscape is full of people. Every where people. All sorts of people. All busy with something. Selling things in their shops, driving, walking, spitting, running, yelling and even shaving.. yeah you can get a fresh cut, just on the street, bicycles with dozens of boxes stacked on them, a woman driving a motor on the highway with a baby in her one hand and driving with the other. Wow! Unfortunately the streets are filled with a lot of poverty as well. It is not uncommon to see someone suffering from polio walk by with floppy limbs or elephantiasis (elephant’s leg), a lot of dirt and waste on the streets, even people who made homes out of this waste material, more animals, hogs, donkeys and a lot… I mean a lot of monkeys. And then there is the smell. A warm, thick, deep, sour smell that sometimes suddenly grasps your nose. At times this is mixed and made bearable by the smell of burning compost or incense.

Seeing all this things really make you feel greatful for our situation back home. It also makes you realize how unfairly devided the world is. At the same time this is only the first curtain of India you see. If you dare to look behind the curtain there is also a lot of beauty, splendor, history and magnificence to the country where all religions coincide! India! The word alone carries so much weight. The slogan “Incredible India” is really applicable, but then in the good and the bad way. India is incredible and unbelievable at the same time. In dutch we only have one word for these two words… “Ongeloofelijk!”