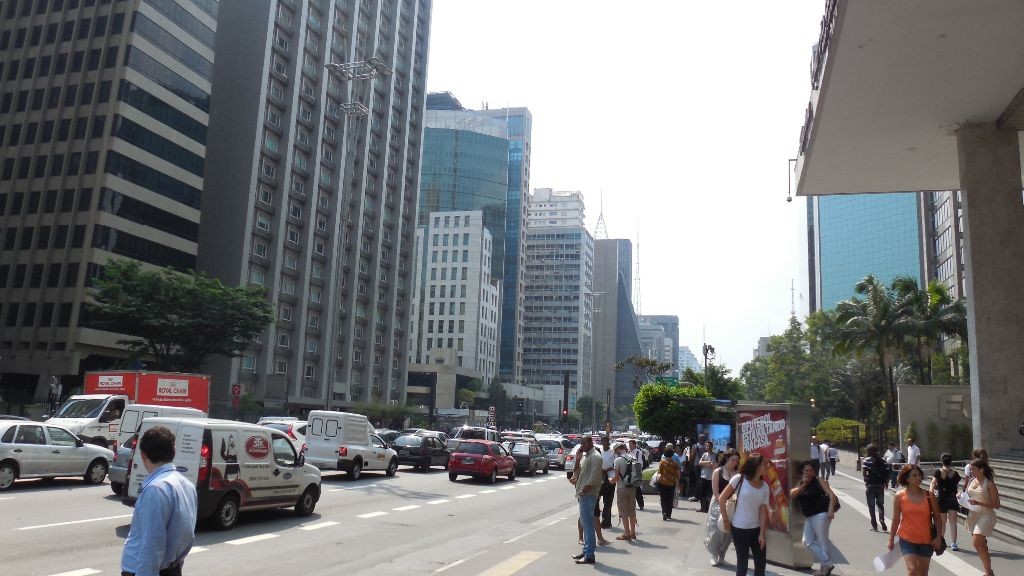 I have been in Sao Paulo or Sampa as they call it, for a few days now and I really know my way around the city. I went to the Ibirapuera park (I still can’t pronounce the name) where there are a lot of buildings from the famous Brazilian architect Oscar Niemeyer, like the Afro Museum for example which I visited. Real nice museum! I also went to the well known rue Paulista where the Art museum is. (Yeah I know, I’m getting old. I know, I know ;)

On the street I am constantly addressed in Brazilian Portuguese. Guess I really blend in with the Paulistanos as the people from São Paulo call themselves. I noticed that the weekend here starts on Wednesday, because the same bars that close early on Monday and Tuesday are packed, crowded full of people and live music from Wednesday on. I am constantly busy with the language. I really want to learn it. One time I asked for directions in Portuguese. I didn’t know what to do with the deluge of words that were replied. So I ended up asking four people the same question until I understood the words. And I mostly did it to practice my sentence four times and be understood LOL

Today I was even part of a movie set. I walked up the stairs at the Vila Madalena metro station and saw a camera crew, with sound technicians, actors and a director. First I stopped in order not to spoil the scene, but then I saw other people just continued their walk. So I also continuid mine, but as soon as I started walking I heard the director yell: “eee ação!!” wich means “Action!” I don’t know what was being filmed, but I guess I’m in it. hahaha

I ended my day with a Yoga class I followed at rue Harmonia. Really nice! It was completely in Portuguese, but with a little help from the teacher and now and then peeking sideways to what the other students did, I managed. For exemple when the teacher said: “pé direito na frente” I had no idea what he was really saying, but I recognized by the sound of it, that I had to put my right foot up front. When the teacher uses the words “respire” (=breathe in) and “expire” (=breathe out) I didn’t know wether to breathe in or breathe out, because the words sound really similar in Portuguese. I just listened wether everyone was breathing in or breathing out. Surviving tactics in the Yoga class haha. I was like super relaxed after that. I did hear a some bones crack inside of me during the class, but I guess that’s a good thing though. ;)

Oh yeah, and the sunglasses… the spacey ones… I like them! They are like sooooo 2014. I had to get me one. And at least I had to change something to my outfit, because I’m rotating the same sets week in, week out LOL