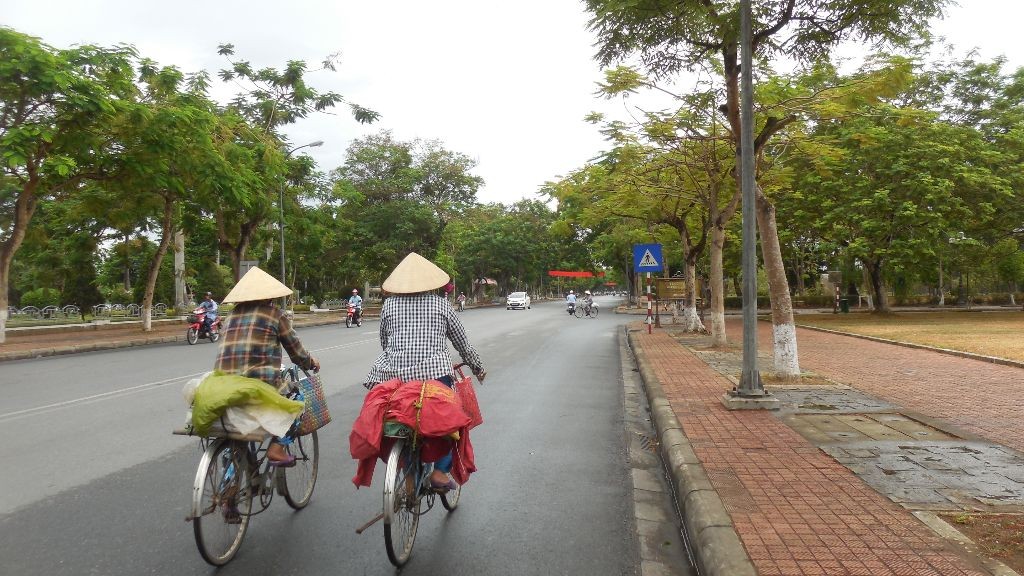 At the exit of the Mausoleum in Hanoi I got in to a conversation with a guy from Israel. He had just returned from a trip from HCMC all the way up to Hanoi by manual motorcycle. He had never driven a manual motorcycle before, but learned it in a few minutes, he stated. He made it seem soooo easy, however when I looked at his arms and legs, they were full of injuries and flesh wounds. Still I was thinking about doing the trip from the North to the South by motorbike. I could buy one here in Hanoi or in Hue and then sell it in HCMC. It is pretty easy! I even did a test drive on a manual motorbike and learnt it pretty quick. A nice lady of the hotel let me drive hers up and down the street. I even arranged an address where I could buy the motorbike for only 250 USD. I would be able to sell it for at least 150 USD in HCMC. However eventually I made the wise decision not to do it. Most of all because I don’t like driving that much and I would spend more than 24 hours on the bike to get all the way to HCMC. That is not my view of relaxation. Secondly I’m a bad driver Hahaha and currently a lot of road construction work was going on in the south. Last but not least bikes do break down and I’m not a good mechanic as well. Hahaha. Noo, I stick to my bus.

But the Open Bus…. that is a whole other story. The busses are so called sleeping busses. Meaning the seats are almost horizontal, layed out behind each other in a train-like position where your feet are in a cabin under the back of the person in front of you. The front of the bus is reserved for local  people. A litlle woman dictator stayed in one seat at the front of the bus and any tourist who dared to go and lay in one of the seats in the front of the bus was screamed to the back of the bus. “No! No! No! V.I.P. go back! Go back!” Some tourist still had the nerve to ask for an explanation: “Why can’t I lay here. I have a ticket, I…” “NO! Back! Go! Go!”, she would reply politely ;-) Mad woman! Lol! Hahaha. And believe me every bus had a person like that. I guess they got hired on unsocial behavior. No footwear is allowed in the bus, so you have to put your shoes or flip flops in a bag before entering the bus. The foot cabin was just a little too small for me to fully stretch my legs. The inside and outside of the bus featured bright neon and Christmas lights. In the bus there were two Tv’s with Vietnamese dubbed Hollywood movies. And the Vietnamese dubbing is the most basic I have ever heard. One woman’s voice impersonates all the character in a monotone voice. Imagine Tom Cruise in an action scene screaming out “Watch out for the bullets!!!” followed by the emotionless, dry translation of the woman’s voice. Funny! Hahaha. Also the volume of the Tv’s was so loud that you could feel your stomach vibrate with the sound. And each time we arrived at a stop, the driver played corny Vietnamese ballads on an even louder volume! The bus had Wifi though! :-) Hahaha.

The ride to Hue was a 20 hour ride, and the day before, I started suffering from an immense loose stool. I have travelled India for a month, with hardly any problems, but now Vietnam got me!!?? Wow! I would spare you the details, but a 20 hour ride with loose stool and your aching toes in a just too small foot cabin is… not your relaxing bus ride. But I managed!

In Hue I had a wonderful hotel and the staff was real nice. The city was also warm and full of good energy. And again I saw a lot of woman on scooters all wrapped up in flower-texture, hoodies.

I visited the Dong Ba Market, which is huge!! There I bought a whole Durian, the famous stink fruit. I had to taste it. It was ok, but not really my cup of tea. I put the remainder of the fruit in the coach luggage compartment of my scooter. “How bad could the smell be?”, I thought. I also went to the Imperial City, Old city or Citadel as people call it. It is a huge site with palaces, tombs and also the forbidden city where the emperor housed his many mistresses. Eventually I went to the evening market under the Truong Tien Bridge. After 7 pm the bridge is completely covered in all sorts of lights, which is loved in Vietnam.

I read about the Vietnames history and found out that the Vietcong was only a small part of their history. Vietnam knows a long history of oppression by different countries like the Chinese and even the French. The Americans just happened to be the last ones. And the way the Vietnamese people see it, is that many countries tried to oppress the free founded Vietnam, but no one succeeded, because each time Vietnam produces a hero that saves them from oppression. That’s a proud vision! I immediately looked different at the Vietnamese people.

Also, to realize that anyone older than 50 has experienced the war is unthinkable. It is soo fresh, but still you don’t see any real signs of it. When I see older people, in a restaurant, or have a small talk with people on the streets I wanted to ask them about their experiences in the war, out of pure curiosity, inquisitiveness and involvement. But I feels inappropriate to do. Mostly I think, because I am afraid it would open chambers they haven’t opened themselves yet. I guess the trauma’s are suffered in silence.

After driving around for a while I opened up the coach luggage compartment of the scooter and a penetrating smell beat up my nostrils. The Durian!!