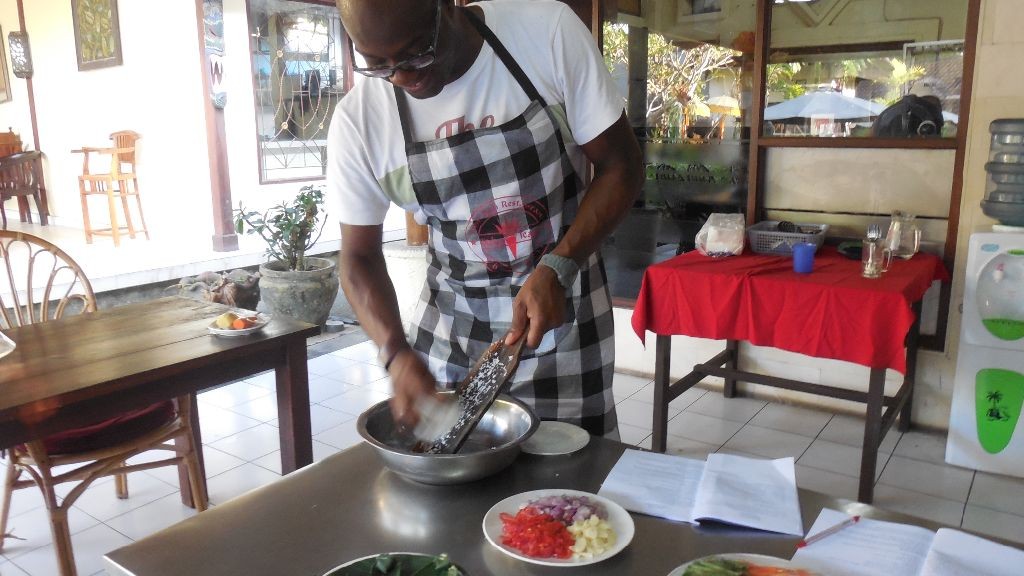 I took a cooking class in Ubud. On my way to the lessons I saw two fighting monkeys. It was quite funny as they kept on going. I was almost late because of this. Haha. The cooking class was great.  I was the only one showing up so it became a private class and we had all the time. I learned about all the spices, vegetables and the cooking styles. I made Basa Gede, Menanak Nasi, Sayur Urab, Opor Ayam, Bali Satay Lilit and Pisang Goreng, which I got to eat all by myself. I rolled out of the restaurant on to the streets stuffed with delicious food. It was so much they gave me a doggybag full of my delicious (even if I say so) food. When I got to the guest house I saw a woman and her child begging at the oil station across the street. I knew about them, because they sat there every night and the guest house staff explicitly ordered me not to give them any money, because it doesn’t help them at all. Gangs, who put them to beg there, take all the money at the end of the day. Horrible!! So if you give them money, the gangs will only continue their practices. I walked over and gave them my bag of food and luckily the woman really appreciated it. Guess the gangs won’t be able to take that away!

The next day I went for Shipwreck diving in Tulamben. A city on the North-east coast of Bali. Just off shore lies a wreck of an US Army ship that was torpedoed by a Japanese submarine in 1942. It was a two and a half hour drive from Ubud. On our way we had a beautiful view of the holey mount Agung. The driver played a cd with 90’s dance hits. The cd was stammering and stuttering all the time, but he didn’t mind. Then I heard the cd was actually a recording of a Dutch radio dance radio station. The one with three numbers, starting with number 5 and ending with 8. Hahaha. Funny! The Shipwreck was immense. We went down, and at first I had some trouble clearing my left ear, but then suddenly you see a gigantic object beneath you. A huge sight and also a bit of creepy, if you realize that dozens of bodies decayed here between these iron walls. It looks like a big monster, all covered with coral, but you can still see the contours of the ship. The windows, the deck and the front of the ship. We even went inside the ship. There are also a lot of sea creatures on and around the ship, even more than at the Great Barrier Reef and just before we got up, we even saw a real Barracuda.

The World Cup is also living here! I asked the driver which country he is supporting. Unfortunately Indonesia doesn’t attend. Indonesia is bad at soccer he told me, they are the best in badminton. Most of the people support Germany. I was like… huh!? Until this day I still don’t see the link, but his words were backed up by the fact that most of the flags hanging outside the houses in the villages were German! Hahaha.