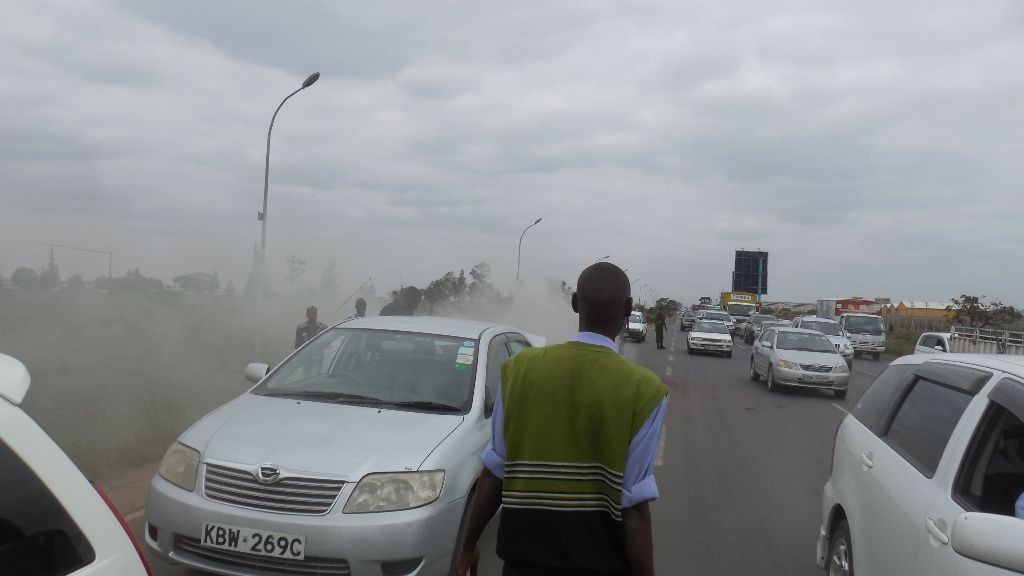 I would fly to Nairobi via Doha. I had joked about my missed flights a lot, but I almost missed this one as well. Half an hour before final checkin I found out I was at the wrong terminal. Even worse, the right terminal was far away from where I was an all the usual transportation to this terminal was down, because it was nighttime. I ended up taking a taxi to the next terminal. Of course the taxi driver charged me double, because he saw I was in a hurry and he seemed to be the only one. At the front desk there also was a discussion about my visa, but that luckily cleared quickly. I was in! Phieuw!

The flight from KL to Doha was almost empty. I could sit and lay down wherever I wanted. I fell asleep with my earphones in, but woke up to M.I.A’s Stepping Up song, which suddenly started playing. I must have accidently touched the play button. Even the airport was quiet. I had to buy a Visum for 60 dollar and there was no ATM. This could have been a sticky situation, if I hadn’t been prepared by taking US dollars with me.

Nairobi was a warm welcome, even though it was officially winter and the temperature was 15 degrees. After being the outcast all over the world I was finally the norm. Hahaha. I recognized my mother, brother, aunties and uncles in all the people I saw on the streets, at the airport, in the cab, even the policemen. Amazing! I was often addressed in Swahili, because they thought I was a local Hahaha.

I took a cab to the city. When we were driving on the road we saw a car with a burning engine standing alongside the road with people surrounding it trying to kill the fire. The taxi-driver parked the car on the side of the road and asked me: “Shall we help?” I nodded. Without hesitation and danger for our own life we started helping the people by taking red sand from a small hill and throwing it on the engine. Each time I got close to the car I covered my face, afraid that the car could explode at any time now. People from passing cars provided us with little fire extinguishers. What a great sociaty!

I arrived at the stop over hostel. A very low budget, little bit depressing place. The people were nice though. The nearest ATM was far from this place and I needed money, so I had to take a cab to get some money. On arrival I stepped out of the cab and bumped my right toe! Seriously!? My left toe had just healed! :-(

I came to Africa for the safari. I was lucky that I was here during the great migration. The migration follows the rainy season, because it has water and green plants. I wanted to the big five (they are the most aggresive and will attack you for no reason when you are around them. They dont want anything around them!), sleep in the park, camp fire, chill with the masai etc.

I almost arranged this from Kenya with the hostel owner, but I told her that I wanted to look in Arusha in Tanzania as well and that I would let her know.

I would take the bus from Nairobi, Kenya to Arusha, Tanzania. There is no real busstop. You just have to signal the bus to stop, but to do that you have to know which bus it is. A friendly girl from the hostel accompanied. We stood there for a while and suddenly she paniced. Oooh, there was your bus. It will probably stop further down the road. I ran with all the power I had in me to catch it. My backpack and frontpack were weighing heavy and I was sweating as hell. Seemed to be the wrong bus. Hahaha. We waited and waited, I got dubious if the bus was still going to arrive and then suddenly my bus was there!! Jeej!

The bus ride was really relaxing. We passed beautiful landscapes and at night zebra’s crossed the road. We arrived at the Tanzanian border. It looked like no mans’ land. A crowded village with all sorts of people. We first had to do our departure at a ticket window on the Kenyan side, then the bus would wait for us on the Tanzanian side. He advised us not to talk to anyone, just walk across the border after you are finished and meet me up at the bus. I was a bit nervous, waited in line. Some guys just passed by waving their passport. Diplomats. I finally did my departure and walked across the border. Off course I was addressed by a lot of people which can be somewhat intimidating but I just ignored it. I arrived at the bus on the Tanzanian side. There I had to do my arrival. I needed 50 dollars. I had just payed most of my dollars at my arrival in Kenya. The bus driver arranged a boy on a motorbike to take me back to Kenya to withdraw some money from an ATM. Well I can tell you. Withdrawing money from an ATM in no man’s land feeling every eye is watching you is not nice! Hahaha. We eventually managed. I got the money, we drove back to the bus, I got my visa and we were in Tanzania!