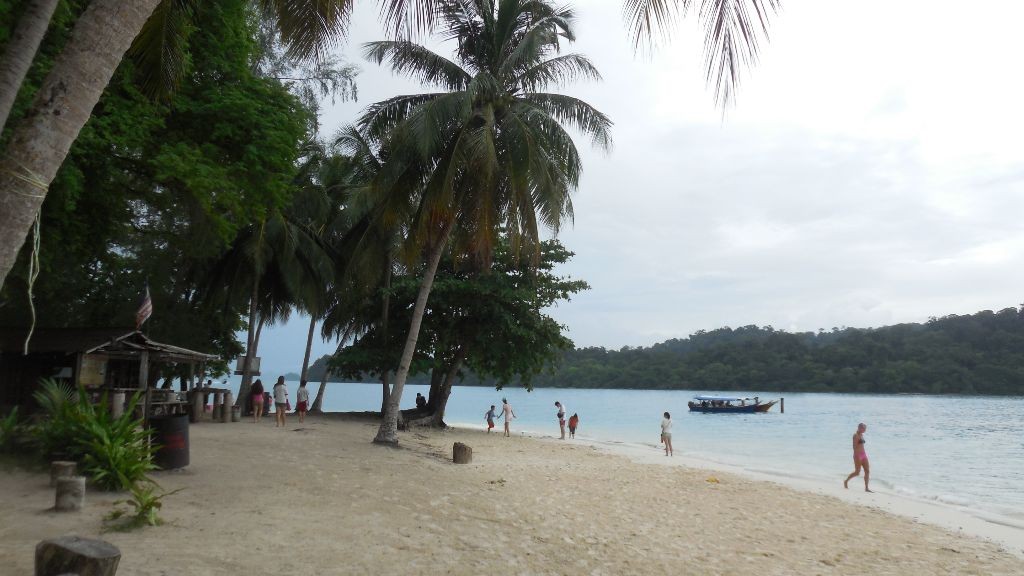 How to waste three flights in 24 hours. I decided to go to the Perhentian Islands. I booked a flight for the next day, but after I tried to find accomodation I found out that at that period the island was fully booked. Only eye bulking, expensive resorts were available. I decided to cancel the flight and go for Langkawi. This was the first flight I wasted, because there was no refund. The get to Langkawi you have to go through Kuala Lumpur. I booked a flight from Kota Kinabalu to KL in the morning and a flight from KL to Langkawi which would departurein the afternoon. Somehow the departure time of the last flight stuck in my head. I got up the next morning to get my flight in the afternoon… darnit! This flight was in the morning. There you go, wasted to other flights. I had to rebook the two flights at the airport and wait there for a while! Pfffff And my flight from Kota Kinabalu to KL was the fastest flight ever. One hour!

I decided to chill out at Langkawi. I have been running these past couple of months, which was really nice, but now it was time to do just nothing. I managed pretty well and because of the Ramadan there wasn’t really much going on. I stayed at a hostel founded by an ex real estate guy from Dubai who fled the country during the recession. The hostel had free drinks all day and delicious food. The organized diners for the guest where I had inspirational conversations with the owner himself and a guy from Syria who lives in China. Wow! I drove around the island on my scooter and just relaxed. I did an island hopping tour. On the first island monkeys snatched the bags of tourist. One tourist thought his bag was save, because it was zipped and monkeys couldn’t open zippers. Well was he wrong! Haha we also saw some white colored, dust like elements blowing over the sand. These were actually crabs. Funny!

The people in Malaysia point with their thumb, because it is rude to point with your finger!

Each morning at 6 I woke up to the muezzin calling the prayer  from the minaret. One morningI realized that this wasn’t a tape playing, but actually live singing. The muezzin got a caugh and had to repack himself.  Also each evening at 21 and 23 o’clock the prayer was called.

I enjoyed the sunset from the beach, sitting in a plastic chair, with a beer, beautiful music on my earphones and just thinking… This is the life!

The next day I also went to Cenang beach and saw people parasailing. I decided to do this. The guy at the counter told me that it would almost be too late, but if I was quick I could still go. I ended up in the air while the sun was setting. I was there up in the air with my flatcap and flip flops still on. The view was astonishing!! The beach, the people, the sun setting… At one point the speedboat made a turn, having me lowering. As I came down I almost landed on some people who were swimming in the water. As I approached them from the sky we both jokingly wooooowed!! Lol! Then it was time to land. I was going for the perfect landing. Stretched my legs and was ready for a quick run. Then my feet touched the sand and I wallowed all the way on the beach, fell on my side and got pulled a few meters further by the parachute that was pulled by the wind. No elegance in this one! Lol!

I went all the way to the Durian Perangin Waterfall. I had to climb to the waterfall over slippery, wet boulders. At the top sat an old man. He greeted me: “AsSalaam alaikum.” I greeted back: “Wa aleikum salaam” With hand gestures he offered me to watch my stuff as I go for a dive at the foot of the waterfall. I trusted him and did just that without thinking. The water was cold, but the experience was warm. I swam towards the waterfall and stood under it for a little while. Then went back, took my stuff and thanked the old man. I had no towel with me, but you dry quick on the scooter ;-)