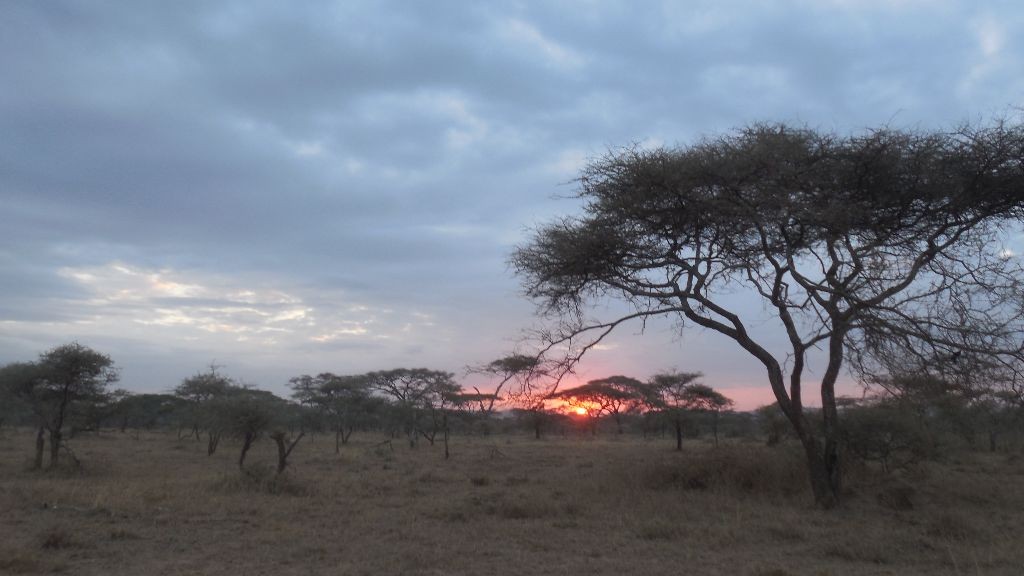 I got picked up to do the five day Safari. We were going to Lake Manyara, Ngoro ngoro crater and the Serengeti. I met up with a female from Argentinia who lives in Germany, two guys from Germany and Juleas the driver. We first drove to Mto wa mbu a village near Lake Manyara. We put away our stuff in the apartment and did the Safari at Lake Manyara. We saw giraffes, monkeys, wildebeests and elephants. Also we saw the 3000 years old giant boabap trees. When we came back we had a walk around the village. We were immediately approached by two friendly local guys who were more than glad to show us around. They introduced us to a lot of people! I even got a wedding proposal from a girl. Funny! We also had a cook with us. He prepared dinner, which had a unique twist to it. Soup served with popcorn. He also introduced us to ugali. Famous local dish that consists of maize flour cooked with water to a dough-like consistency.

The next morning we went on our way to the Ngoro Ngoro crater. On the way we were stopped by police, because Juleas had expired papers. We had to go to the police station, but it turned it the police was wrong. At the entrance of the park we saw a monument for the rangers that were killed on the hunt for poachers. This is a fierce and deadly battle! We passed the night in tents at the Simba camp site just outside the crater. Our cook assembled in the kitchen with the other cooks from the other safari’s. The kitchens were really, really dirt places, but the food that our cook managed to prepare was delicious. Only the lunchbox supplied us with was sometimes funny. A motley collection of a chicken leg, pastry, empanadas, cake, banana, chocolate, bread and a boiled egg. By the way, the egg yolk is white here in Africa. #crazy!

During the safari in the Ngoro ngoro crater we saw elephants, zebra’s, monkeys, lions, hippo’s, wildebeests and ostriches. The first time you see each animal is amazing! After that you somehow get used to it. The first time we saw a lion in the wild, we were star struck and kept on making pictures. But after the fourth time you don’t even take out your camera hahaha.

We were aiming to see the big five: Lion, Elephant, Buffalo, Leopard and Rhinoceros. We still needed three of them to complete the deck. The moderate breeze seemed to easily form mini tornados which you can see now and then. Beautiful!

There was almost no wifi during the safari, so for five days I was mostly out of internet. Even power sources were scarce. Every day we ate in a large dining hut where people were fighting for power sources. That evening we were visited by a large elephant while we were eating. Suddenly it stood there. Impressive! An English lady who had lived in St. Marten and was on a three week safari bragged about how she and her man stood eye to eye with a lion when they wanted to leave their tent. It was hard to believe, but on the other hand… all the animals can visit the camp site. Also the lions hahaha. That night I slept badly, because it was very cold, people were snoring and I constantly thought an animal was pushing our tent, but it was just the wind Hahaha.

The next morning we went on our way to the Serengeti, which means endless plain in Swahili. The Serengeti is twice as big as the Netherlands. On our way we stopped at a viewpoint where we saw Soupabs, nicely colored birds and an Agama lizard which is a pink/purple lizard. Beautiful!

During our Serengeti safari we saw a lot of lions. We were joking about witnessing a hunt would be the optimum right now, when suddenly Juleas spotted a cheetah lying down in the grass. Before we knew it, the cheetah started sprinting to hunt a gazelle. I wanted to take my camera out, but it was over before you knew it. It got the gazelle in seconds! Epic!!! We decided to make more jokes about things we would like to see ;-)

We passed the night at camp Sero Nera in the middle of the Serengeti. At night you can hear animals graze outside of your tent. Also, one night we heard a very loud sound of an animal and no one knew what it was. Another night I really had to go to the toilet and went . The camp site was full with tents and completely dark. I had to use my flashlight to see where I was going. I was a bit afraid that I would suddenly shine my light on some eyes of an animal. This wasn’t completely unthinkable because the night before a group of hyenas plundered the trashcans on the camp site. Fortunately the only animal I encountered was a huge spider underneath the sink at the toilets.

We enjoyed the Umbrella Acai trees and dotting this vast savannah are outcrops of granite that stick out like rocky islands in a sea of grass. They are called kopjes, a Dutch legacy maybe?

At one point we stopped in front of a herd of elephants and a pawn. We watched the whole scene of the elephants approaching the pawn, drink and wash. A beautiful sight!!

We also smelled a strong, ugly smell in the air. This seemed to be a dead hippo. It was laying on it’s back an can be smelled for miles away.

We saw the big five! The last day we enjoyed the sunset over the savannah. I put on some jazz music and everyone in the van felt the moment! We were content. This is life!