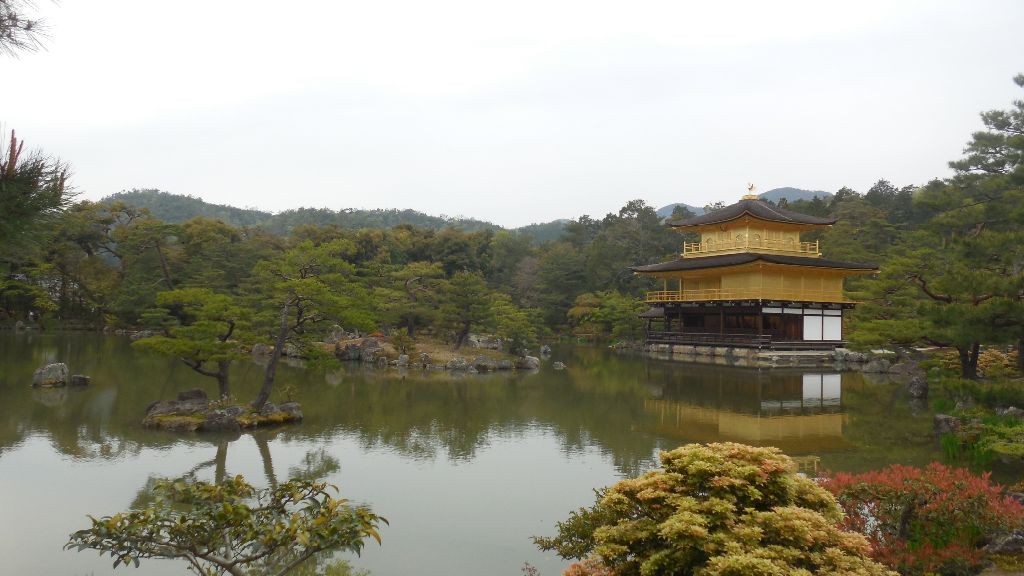 After Tokyo I took the Shinkansen, the super fast bullet train, to Kyoto. It goes every 10 minutes. Kyoto is more relaxed, traditional and historic than Tokyo and it is famous for it’s shrines, temples and castles. Here people more so wear traditional costumes, you can see geisha’s walking the street and I even saw a man with a hog on a leash.

The first night I stayed in a Ryokan, a traditional Japanes inn that originated in the Edo period (1603 – 1868). The tatami-matted room even had a private tea set. I had to wear a yakuta (a japanes garment) and sleep on a futon bed with a buckwheat pillow. It had a real traditional feel to it, if you forgot about the airco and the flatscreen tv the Ryokans nowaday have ;-) Hahaha

I was adviced to just rent a bike and visit the beautiful temples and shrines. They didn’t advice me to visit the far away Bamboo grove by bike. And guess what I did? Hahaha. It was afternoon and I had untill five o clock. I had a map and on the map it didn’t look that far. I was wrong. I ended up cycling for two hours or so and still didn’t reach it. People I asked a long the way, people where shocked when I told ‘m where I wanted to go. It was really far. Strangely enough none of them offered to walk me there this time ;-) It was almost a quarter past four. And I still had to cycle for about half an hour. I passed a train station and decided to do the last part by train. It was only two stops.

The Bamboo grove was beautiful!! It was worth every minute of cycling and the two stops by train!

The next day however I decided to do a lot of temples and castles by bus. Lazy tourist style! Hahaha. Each templeI was more beautiful than the other. I went to see the Kinkaku-ji Temple also nick-named the Golden pavillion, The Nijo Castle and Ginkaku-ji, the Silver pavilion. The Silver pavillion obviously had the most beautiful garden. But none of these could stand against the Ryoan-ji Zen Garden. I saw this one on television back in Holland on the program called “Erica op reis”. This was my main trigger to visit Japan. The garden doesn’t include flowers or water, but only white gravel and a few rocks. It is said that no matter from which angle you look at the garden, it is not possible to see all the stones at once. I sat there for ages, mesmerized by the beauty. Amazing!

On my way to one of the shrines I met this Japanese guy who wanted to start a conversation, but his english was as bad as my Japanese is. After some failed attempts of communication he raised his finger, like he wanted to say: “Wait, I have an idea!” He took his iPhone out of his pocket and opened an app and started to talk a Japanese sentence in to his phone. He then held the phone next to my ear for me to listen. The phone said in a robotic voice: “Do you like Japan?” He then gave the phone to me and I understood that I had to answer in to the phone. I held the phone to my mouth and replied: “Yes, I like it very much. It is a beautiful country.” He took the phone, looked at the screen. It didn’t work. Again he gave the phone to me and I repeated my answer. This time it worked. A robot voice, speaking the Japanes translation of what I just said. The app was named Naritra and we communicated through it all along the way. Genious!! This is the future!

I also attended a traditional tea ceremony. We were introduced in to the art and history of the tea ceremony then the woman performed the tea ceremony, which was a range of delicate actions. Taking a spoon, putting the spoon back, taking some tea, mixing it with water, cleaning the spoon, putting the water back etc. etc. I had walked all day and was a bit tired, so this was really relaxing, almost meditating to look at. Later on we learned that every action has a meaning. For example before you drink your tea, you look at the cup. This is to admire the artwork on the cup. Then you turn the cup 180 degrees, so the artwork faces away from you. This is not to besmirch the artwork with your lips and to let the other people in the room also admire the artwork on your cup. After you finished drinking you again turn the cup 180 degrees, so you can admire the artwork again. Each and every action has a meaning like this. The ceremony took about half an hour. After she finished we had a cup of green tea. She explained that this was only the short, basic version. Normally a ceremony takes like three hours. Three hours for a cup of tea… really!? It is beautiful and I like the symbolism around it, but I don’t know if I could wait three hours for a cup of green tea. Hahaha The tea was delicious however! In the beginning she explained that one of the principles of the ceremony is tranquility. Later on she explained that one cup of green tea holds more caffeine than a cup of coffee. I couldn’t help but asking how these two work together, because it sounded a bit contradictory. She answered: “We are good at surpressing our feelings, it is typical to Japanese culture” I was like wow, best answer ever!

At the hostel I was also told about this city full of deers that walked freely everywhere, Nara. I decided to go and see it. It was only half an hour by train from Kyoto. I was told that the deers would leave at sunset. It was getting late, so I had to be quick. When I arrived I saw no deer at all. “If you walk this street all the way, you will see lots of them”, said the man at the tourist information desk. I walked the street and suddenly I saw a deer. Amazing!! But then a saw three more, four more and only a few meters further there was another flock. They where everywhere. I visited two shrines and also there where deers. Went to the park and even more deers. Crazy!!!

I took the Shinkansen train back to Tokyo. At one of my last nights in Tokyo I visited the Robot Restaurant. It was more like a Robot Show. It was one bulk of music, sound, effects, laser lights, robots and spectacle!! It was your typical Japanese extravaganza and I loved it! They only forget to bring me my food, which I got afterwards, but the show was so breathtaking that it didn’t even matter! Haha Like wow!!

On my last night in Tokyo I also went to the Golden Gai, a district in Tokyo that is composed of a network of six narrow alleys, connected by even narrower passageways which are just about wide enough for a single person to pass through. Over 200 tiny shanty-style bars, clubs and eateries are squeezed into this area. I was with a group of Japanese people I just met. When we walked the streets they started pointing full excitement at a guy that passed us. It was the world famous Sumo Wrestler Hakuho. Jeej! I have seen Hakuho! I didn’t know him before, but I guess now I do ;-)

Tokyo was so much fun, that it became very late. At seven o’ clock in the morning I realized that my plane was going to leave in a few hours. I rushed to the hostel, packed my bags, checked out and I don’t know how, but I arrived at the airport just in time. Hahahaha. Japan, love it!!! Up to India!!