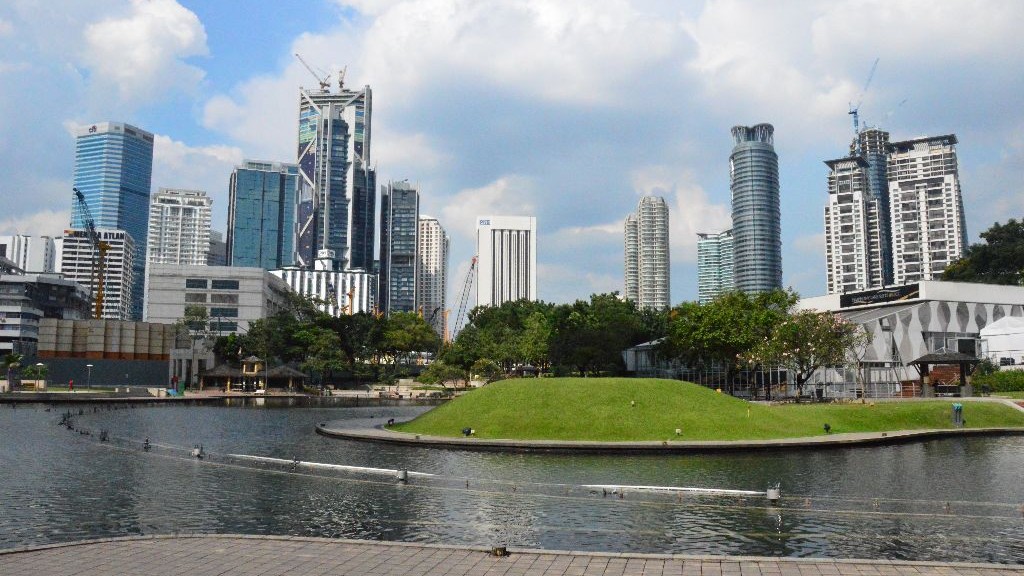 I arrived in Kuala Lumpur, or K.L. as the locals call it, in the evening. I hadn’t had the time to do the research on this country and its culture. I only knew that the language is similar to Indonesian. Or actually the other way around. The Malay language has a funny way to deal with plural. You just say the same word twice. So to say boys, you just say: “boy boy”. Genius! Lol!

People were talking about the missing Malaysian airlines airplane. I didn’t catch the news, but now was surely aware of it.

I quickly found out that it’s an Islamic country. The airport staff wearing headscarfs, prayerrooms, mosques. Instead of a taxi I took a local bus to my hostel. The bus drivers where really rude, but I could laugh about it, because they were real rude, but their actions were really nice. For example the bus dropped us of in the center and then he would ask each one of us: “Where you go!?” When it was my turn I said the name of my hostel. Then he took his phone, called someone and arranged a friend of him to come pick us up and bring us to our hostels. No charge. I still don’t understand, but it was really nice… or maybe just part of the deal! ;-)

In the hostel I met Can, a Turkish guy. We both wanted to see the Petronas towers, so we decided to hang out the next day. But first I was going to the revolving restaurant and we would meet up after that. Revolving restaurant!? Yeaah bway!! ;-) Hahaha. In KL there is the KL tower and at the top of this tower there seemed to be a restaurant that revolves 360 degrees in the timespan of one hour and a half, giving you a ultimate panoramic view of Kuala Lumpur. It is called: “360 Atmosphere revolving Restaurant”. Because it was afternoon, I did a high tea. I was really hungry so all the sweets, mini-sandwiches and cake tasted delicious. From the restaurant you are able to see the famous Petronas towers, but only sideways. However contrary to what I expected not the whole restaurant was revolving. The windows and the center were stationary. Only a circulair plateau with the chairs and tables on it were rotating. Ah, well, at least I could scrape this of one of my bucket list ;-) Hahaha

During my stay in Malaysia it was Ramadan, so all the restaurants were quite empty during the day, except for a few Chinese tourists and Frans. I felt a bit guilty when I was hungry and ordered some food, knowing the man or woman serving the food is equally as hungry, but doesn’t get to eat until sunset. I also felt a little envy when they handed me the plate. I could hear them thinking: “Here is your food, I hope you enjoy it @$$hole!!” Hahaha. Sorry!

After the 360 Atmosphere I met up with Can. We went to a local market where we were told to try a famous local desert, consisting of a squid, filled with coconut  and dipped in syrup. I tried it! Only one bite, but the best way to describe it is eating a piece of tire that has a real good taste but impossible to chew. After that I bought some satay. Satay Kamben which I remembered from Indonesia, but this had nothing to do with it. It was cold, though and tasteless. We didn’t finish it, and because we were still hungry we decided to go for a hamburger. Well… this one comes in the top 3 of worst hamburgers ever! I gave up after that. Hahaha. Can did try some Roti Chania which seemed to be pretty ok. It was getting a bit rainy. We went to the Petronas towers and made some pictures. Because there was not much more to do in that area, we made some more pictures. And because it became dark and the lights on the towers were now on, we made some more pictures. I think I have over a hundred pictures of me standing in front of the Petronas towers Lol! Haha A guy tipped us about the light show that would be starting at the back of the towers. We went there and watched it. Pretty amazing! But one of the main reasons for visiting Malaysia was it’s beautiful rainforest. And to see that I had to go to Sabah, Borneo, the eastern part of Malaysia on the other side of the China sea!