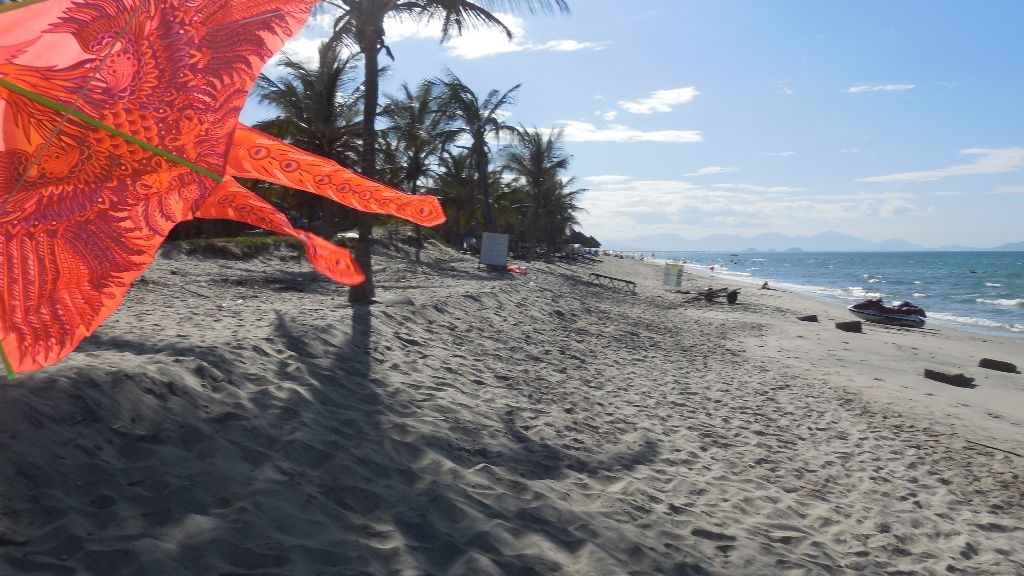 I took the bus from Hue to Hoi An, which is only a 6 hour bus ride. Nothing compared to my previous bus ride. But then when the bus stopped and we got a chance to have something to eat guess who seemed to be on the same bus as me? Alan!, the Chinese guy from England I met in Koh Phangan. We went to the Full Moon party together and parted ways not knowing about each others’ upcoming travel plans. How big are the odds that our paths would cross again! Later on, Peter another guy from our Full Moon party group also arrived in Hoi An. Crazy!!! #unreal

Hoi An, the culinary capital of Vietnam and also famous for its tailor shops and couture clothing is a lovely peaceful city. The traffic is minimal, so you can easily travel the city by bicycle. It is even prohibited to enter the Old Town, an ancient part of the city, by motorized vehicle between 3 pm and 9.30 pm.

Because it was my fourth day of heavy loose stool, I decided to go to the hospital. Just to check if it was more than just bad luck with food. I ended up 2,5 hour at an infuse and got an antibiotic cure. Wow! And I’m still not sure if it was really necessary or that they used a bazooka to shoot at a mosquito just to make some money of my insurance. However, every possible inflammation I might have had in my body will now be killed. :-) And the good news was, that my toes were almost healed. Hahaha ;-)

It was becoming dark now, the lights were going on all around town. The streets were full of beautiful neon lights in every color imaginable, from green to orange. It almost looked like a Christmas circus.  I got hungry from waiting at the hospital. I drove around town and then suddenly I smelt a BBQ. My nose followed the aroma like a cartoon character and before I knew it, I was sitting in a downtown restaurant between local people. There was no menu. Everyone got the same plate. BBQ meat with vegetables and steamed rice. It was delicious. So delicious I ordered a few pieces of meat just for take away. I later on stored it in the fridge I had in my room.

Then my eye cought a tourist couple. They woman came to talk with me, showing me all the exact restaurants, places, shops I need to go, because they were lovely. I was more like, I want to find out myself Hahaha. but she was just being nice. She concluded with the sentence: “I like it here, because I hate tourists!”

Even though the cities really differ, I constantly mistake Hoi An for Hanoi. They don’t even look similar, but they got some strange similarity to them. Because Hoi An is the culinary capital I had to try all it’s delicious dishes. I tried Cao Lau, which is the most famous local dish of ‘m all. It is a regional Vietnamese dish made with noodles, pork and local greens, which is only found in the town of Hoi An.

The toilets are also somewhat funny. I sometimes ended up in the woman toilet because some of them only say: Nam and Nu. Which one am I!!??? Lol! Nam is man. Just reminded it by spelling man backwards ;-)

I stayed in a guest house with a nice family. The grandma sometimes scared up when she saw me, but each time greeted me with a big smile afterwards. Hahaha Here I finally solved the mystery of the flower-texture hoodies on the scooters. I asked the daughter and she explained me that they do it for sun protection. It is way cheaper than buying sun cream each time. Ok! Guess the flower-texture is just the fashion-statement. ;-)

I went to the Old town which is entered by the Japanese covered bridge. After that I went to the Quan Cong Temple and the History and Culture museum. Next to these buildings was a market. At the market I was approached by several woman, who all used the exact same script, identical to the letter. It went like: “Where you from sir?” “When you arrive in Hoi An?” “How long you stay in Hoi An?” “Come have a look in my shop with beautiful shoes, custom-made suit. Only watch!” After three times, it really started to become unreal. They must have been following the same course or something. One woman however was inventive. She saw that I was looking for a place to park, because I wanted to visit the Quan Cong Temple. She waved me over. Free parking sir, free parking here. I parked there and then she came to chat with me normally. And just when I put my guard down she also started about her shop. I politely excused, but when I came back from the temple and the museum to pick up my scooter she was still sitting there next to my scooter. With a straight face she said, “50 dollars sir”. I was completely surprised. She kept looking at me with a straight face and now raised her hand to receive the money. “50 dollars sir for the parking”. I was clearly flabbergasted and just before I repacked myself and was getting ready to start an argument with the sentence: “But you just said..” she helt her belly and almost fell to the ground, laughing! “Just joking sir, just joking! Hahaha” She had fun, and she got me. I had just been pranked by this Vietnamese woman. Lol! Hahaha.

In the old city I spontaneously decided to buy a kite. I wanted to go kiting at the beach. That seemed like a fun, silly thing to do and also it would cater to my child within ;-). Full of excitement I drove to the beach. Took the kite out of the package, constructed it and let it up in the air!!! Only to find out that the string was only 1 meter long. :-( The wind was pretty good though, so if I had had a longer string. However, I can officially say I kited on the beaches of Hoi An ;-)

The next day I got up and wanted to eat the BBQ meat I saved in the fridge… it already had a rotten smell to it. I skipped this one, because I didn’t like the Vietnamese hospitals that much hahaha. I rented a bicycle instead of a scooter. I realized it had been a while since I’ve ridden a bycicle. It was real nice. I went to the beach to relax and swim and after that it was almost time to catch my bus to Ho Chi Minh City!