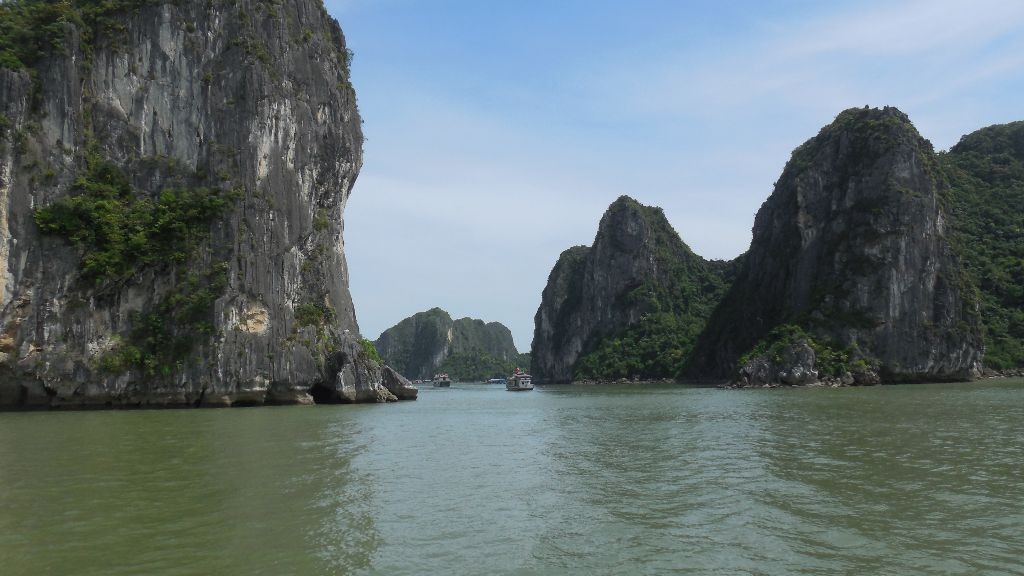 When I think of Vietnam, I think of Platoon and Tour of Duty… the Vietnam War. Images of American soldiers, Chinooks and Apaches fighting people in rice fields with conical Asian hats. Of course these images are way to limited to depict modern day Vietnam.

My plan was to start in Hanoi in the North and then move through Hue and Hoi An all the way down south to Ho Chi Minh City (HCMC), former Saigon. I bought an open bus ticket for only 40 Dollars. You can travel a lot of cities with it and can decide when you want to move from one city to the other. The only rule is that you have to travel in one direction. Fair enough!

As soon as I arrived in Hanoi, I didn’t feel none of the heavy energy of it’s relatively recent war. Instead, the streets were crowded with people and the atmosphere had a sugar sweet feel to it. The street view was filled with these conical Asian hats, called nón lá (leaf hat). Later I found out that they dip these hats in water to wear it as an evaporative-cooling device while working the land for example. You also see a lot of people walking with ??Stengel met weegschaal?? holding their fresh products they want to sell. And just like in India, the overloaded bikes are a common part of the street view. They literally transport anything on their bike from dozens of boxes, TV’s to dead pigs. The streets had actual clear street signs and all the houses were numbered, which I can’t say for each country. The traffic lights show the number of seconds until they will jump to another color. Which I think is handy ;-) And just like in Costa Rica you can pay with Dollars as well as the local currency: Vietnamese Dong. Everywhere, from the airport staff to the streets you see the Ao dai, Authentic Vietnamese silk dresses. I loved the design of it! Real nice! There are also a lot of art stores here, selling Vietnamese art. One particular design I liked was the one with the pink flowers on a silver silk background. One thing I didn’t understand were the thick hoodies with flower textures, which Vietnamese woman wore on their scooters. They were completely wrapped around in it. It must be freakin’ hot!

When I arrived at the Hotel, I got to meet the slightly darker side of Vietnam. The first thing I noticed was that Facebook was blocked. The government says that it is an error in their networks they have to fix, but the truth is that it is probably done on purpose. However with a little effort it is easy to get past the block.

In Hanoi I just walked around a lot. At night Vietnam is covered in Christmas-like lights in all sorts of colors, green, orange, red… they love it here! I love it! Hahaha. Also in the streets, you had these street food restaurants, with colored, tiny, plastic stools where you could get delicious, street food.

The next day I did a day trip to the famous Ha Long Bay which was one of the main things I wanted to see in Vietnam. On the bus I met an Indonesian couple who travel the world a lot. The guy was saying that he travelled almost the whole world etc. etc. I have an iPad app that let’s you fill in the countries you have been through and calculate the percentage of the world you have travelled. I invited him to fill in his countries. He was shocked to find out that he had only travelled 14% (which is still a lot). After that the conversation changed to more real life personal subjects. Hahaha After a two hour bus ride we finally arrived at Ha Long. There we took the boot. On the boot we had a great lunch. I sat at the table with the couple and three girls from Singapore we had just met. We talked about both the countries and also my experiences there. The woman of the couple had a conversation with one of the girls in their mother language. This seemed pretty normal, until I realized that the girl was from Singapore and the woman from Indonesia. Curiously I asked how they could understand each other. They explained me that they speak Malay in Singapore and that the Indonesian language originated from Malay, so the two languages are so similar that they can understand each other for 80% or so. Amazing! But the thing I found even more Amazing were the rocks that were suddenly entering my view. We were there Ha Long Bay!!!

The sight was just as in the pictures and I can tell you it is a real unreal feeling to suddenly stand in one of the pictures you were admiring on your computer at home. Lovely! We took a bamboo boat to sail under the caves. Breathtaking! The boats were floating lightly and we had to get on them one by one. They were really small boats actually. When I got on to the boat I was supposed to put my foot in the middle. However I stepped slightly on the left. My weight almost made the boat tilt counter clockwise and me fall in to the water. Hahaha Lucky me! We sailed past the water villages. People who made houses on the water, out of their boats, because they were not able to afford land. The village even featured a school for the children.

The guide also took us to a cave, that was enhanced by red and blue ambient light. Instead of telling us about the history, he pointed at seeming figures you could see in the rocks. “Look there, if you look closely you can see a kissing couple, and there the same kissing couple when they are older” “Look… there you can see an elephant” etc. etc. Super lame!! Lol! Hahaha. I eventually started to play along searching for figures. I discovered a heart! Even the guide was surprised. He hadn’t seen that one during all his tours. Nice!

On our way we drove on the Long Biên bridge passing the red river. Left and right we saw many couples who stopped on the bridge sitting on their scooter, looking romantically at the water or kissing in an intimate hug. This seemed to be THE place for a romantic getaway. It had a nice view over the river and it featured a cool breeze.

My toes were bettering, but I still had to go to the hospital to change the bandages. This time it was free, but they did it so bad, that the bandage just fell off my toes the moment I left the hospital Really the just fell on the street. Hahaha. I decided to use my own medikit and fix it in a makeshift way. Haha. That would be the last time I would go to a hospital to get my bandage changed.

The next day there was no power in the hotel. Here in Vietnam power outs are quite normal. I brushed my teeth in the dark and went down stairs to the reception. “Yeah, power down between 9.30 am and 3 pm”, they said. Wow! The government can just do that. I went to the Ho Chi Minh Mausoleum there was literally a line of at least one kilometer, but it moved real quick. The tempo was the same as a normal walk, so before I knew it I was there. The closer I get to the Mausoleum the stricter it got. Soldiers were walking around, fiercely telling people to keep silence. Then the line entered this big building and in to the room where he lies. You see him laying in a glass coffin in an heavily air cooled space. Impressive! but also kind of sad if you think about the fact that he really wanted to be cremated. However the government decided else. In the same walking pace, the line passed the glass coffin and before you knew it, you had left the building. However with a sight on your retina that was there to stay for a while