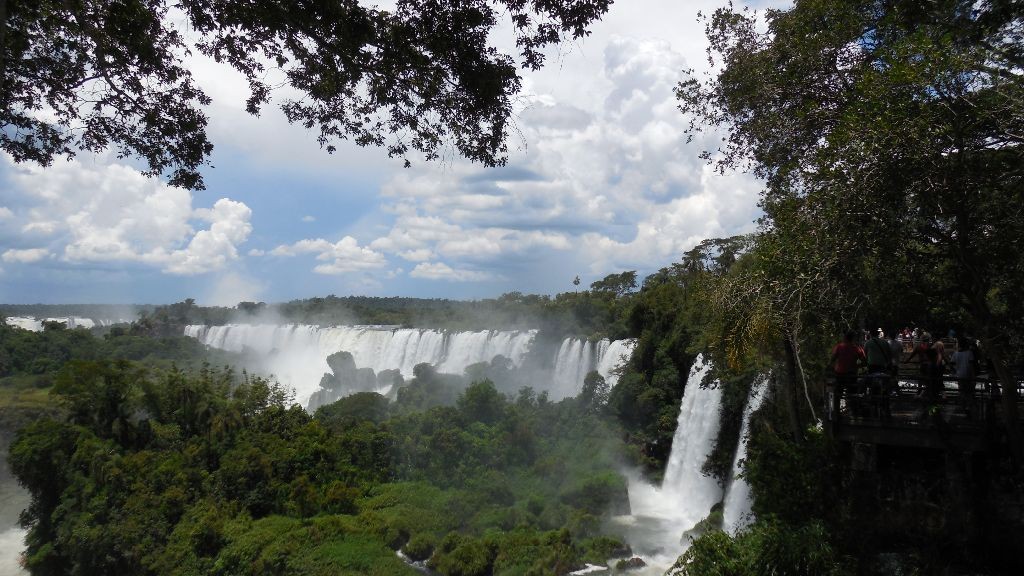 There I went, the 17 hour bus trip to Foz. Off course the bus was an hour late. This is Brazil. ;-) So we left about 23:00 o’ clock. The busses are very comfortable so I slept most of the time and only woke up when we made a stop. And I remembered the number and location of the bus, because you don’t want to take the wrong bus. At 0:00 we made another stop. I got out, went to the toilet and came back. Then we made a stop at 3:00. I got out, went to the toilet, bought a bottle of water and got back. Then at 6:00 the bus stopped again and only a few people got out. Again I went to the toilet, which was really hard to find this time. But when I was on my way back to the bus, I saw this girl running up to me asking panically and slightly out of breath: “Arr ghjoe fwam gheer!?” I recognized the girl, she was in the same bus as me. I replied: “No”, but still didn’t get the question. “Well, the bus driver was going to leave without you! This was not a stop. We have to get back quick!!”, she said. And we ran to the bus, which luckily was still there. Later on in the bus she told me the complete story. The bus driver was going to leave. She informed him, that I was not in my seat. He said, well that is bad luck for him. All Brazilians know that this is not a stop. She told him I probably was not Brazilian and that she was going to find me. He gave her two minutes to find me and other wise she would be left behind also. Wow! There are nice people in the world and the fact that I seem to look Brazilian can also work against me. I don’t even want to think about what would have happened if I was left behind, with no money, no passport, no nothing.

We arrived in Foz de Iguacu which is a nice, little, cosy town. And I finally did a Churrascaria. A typical “all you can eat” Brazilian meat restaurant. They are all over Brazil and I was told that it really is an experience. And they were right. I loved it!! There is a buffet of salad, rice, beans, potato, olives etc. etc. You can put any thing on your plate. And the waiters constantly serve all kinds of meat at your table on a long spear. There is even a card with an image of a cow and they point out which part of the cow you are eating. They tell you what kind of meat it is and you can just say yes or no. I don’t know if I look like someone who can have a lot, because the waiters kept flocking my table. Rump steak, Filet minion, pork []vlees soorten]. Nine out of ten times I had to say no, because I wasn’t even ready with the previous piece of meat. Then suddenly a waiter came to my table saying: “Chicken heart sir?” At first I was like: “Seriously!? Chicken heart!?”, but then I was like: “I might as well try” So I ate chicken heart which obviously was discussing. It tasted like chicken, but had a mussel like structure. And I don’t like mussels. Hahaha. The most surprising thing wasn’t even the meat, though it was really good though, but the roasted pineapple with a caramelized cinnamon, sugar crust. Delicious!! When I was really stuffed and asked for the bill, the waiter just insisted I tried the deserts, because they were sweet. And he was soooo right!! I eventually literally rolled out of the Churrascaria. I don’t think I have ever felt this stuffed, but it a good way.

The next morning I visited the Iguacu Falls. The Iguacu Falls are arranged in a way that seems like a reverse letter “J”. The border between Brazil and Argentina runs through the Devil’s Throat. On the right bank is the Brazilian territory, which has just over 20% of the jumps of these falls, and the left side jumps are Argentine, which make up almost 80% of the falls. I went to the Argentinian side, because there is more to do there. It is just a 1.5 hour trip to the Argentian border. We gave our passport to the guide to get us across the border, entered the national park and hiked to the falls. You hear the sound of 1800 m3 water per second spewing falls from a distance. It is the place which is called the mirror of God, a wholly burial place for the native indians, a place with a lot of history and suddenly you are standing eye to eye with this indescribable wonder of nature. Simply breath taking! We took a boat that got us really close to the falls. So close that we completely got wet. We crossed the 2 km long bridge over the whole stretch of the rivers that end out in the falls to eventually come to the “Garganta del diablo” or “Devil’s throat”. This is were the falls turn in a curvature, the half circle of the reverse letter “J”. We stood on the landmark of the three frontiers, the meeting point of the three countries: Brazil, Argentinia and Paragauy. It’s crazy to imagine! What I feel during this trip is so big it is difficult to find the words!

Now and then people ask me to make a picture. At first I think they ask me to take a picture for them, but then I find out they want me to pose with them in the picture. I’m not sure what this is. May be I have a look a like in Brazil!? (Not again ;) But one night a drunk guy at a bar looked at me and enthusiastic yelled: “Anderson THE SPIDER Silva!!! You look like Anderson THE SPIDER Silva. ” I googled the guy later on and thought seriously!!? I don’t look like this guy by far!!! But if this is really the guy I’m compared to a few people have a fan pic with a fake Anderson on it. LOL

When I came back I did the Churrascaria again. Why not? LOL And back at the hostel, I had a new room mate from Hong Kong. Named Ken. We talked a bit and then turned of the lights to take a nap. The lights were only out for 10 minutes when I heard him scream and move in panic! I rushed to turn on the light and asked him what was wrong. “An insect the size of my hand is flying around here!!” he replied in fear. I kept my calm, but I was not keen on an insect the size of a hand. Then it hit me, flattering it’s wings hardly against the side of my head. At first even I was shocked, but immediately discovered it was just a butterfly in panic. False alarm and two heroes! LOL hahaha

The next day I went to the Brazilian side of the Iguacu Falls. The Brazilian side has a lot less to do but gives a beautiful panoramic view of the falls and you can even walk a bridge that sets you amongst the falls. The Brazilian side is also more about making money. For example you can rent a helicopter to fly above the falls. The Argentinians don’t have that, because of the pollution. Also… and this is really crazy…. you have to pay an entrance fee, based on your country of residence. I went there with a guy from Denmark and we paid the head prize. On the other hand I think it’s pretty fair though. The Brazilian side also had a lot of coatimundis walking around. These creatures move in gangs, are really aggressive, can inflict serious scratches and the aim at your food. And still people are dum enough to feed them. Wow! Finally I searched for the Cataratas. I constantly saw this word and wondered what it was. I knew one thing. I had to see the Cataratas. Then I found out that Cataratas is Portuguese for waterfall and I guess…. I have… kind of… seen those by now. LOL