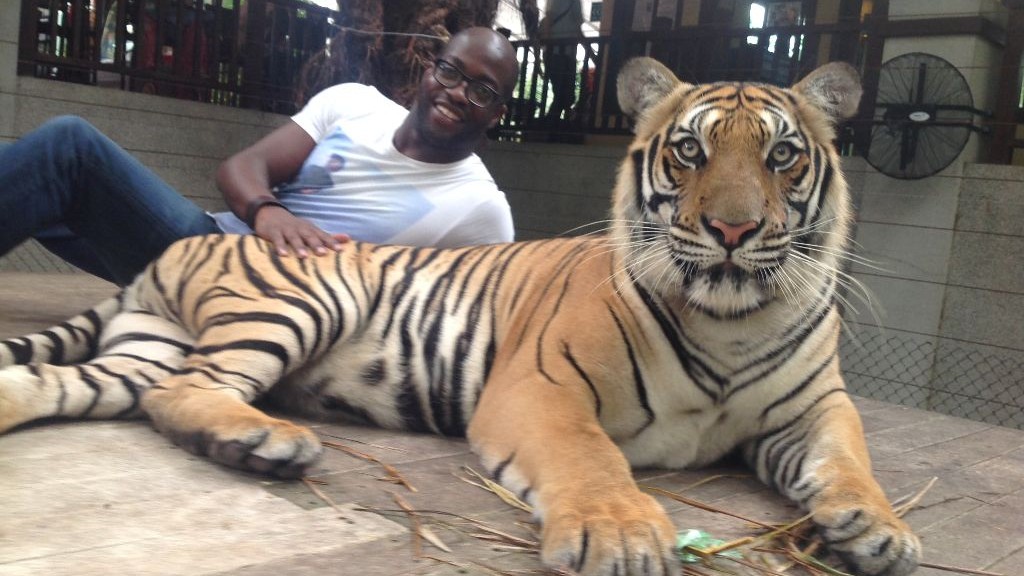 From Bangkok I took the train to Chiang Mai. Having been on trains in India I thought I knew a bit what to expect, but then again I should have known better. On this trip nothing is comparable thus far. The train to Chiang Mai looked like a normal sleeping train with two lower and two upper beds/benches in each compartment. That is until you get to the restaurant train-unit. This train-unit had tables and chairs, a bar, neon lights and really loud ancient, cheesy pop hits. The disco unit!! Like wow!! Hahaha. And strangely enough the windows of this unit where open and people were allowed to smoke there as well.

During the trip we suddenly heard a loud hammering sound, like the train crashed in to an iron wall. This actually was the train splitting in two or more pieces. They do that when the track has some significant curves ahead. The separate units are more flexible. As a whole the train is not able to take all the curves on the track. After the curves the train-units click back together. Almost sounds like a scene from the Transformers. Hahaha

I was in a compartment with a Swiss guy and his Thai fiance. They met in Thailand two months ago and were going to get married in Switzerland. They were now on their way to her village to meet her parents and to get some paperwork done. All I heard was: Two months!? Wow! Hahaha

I arrived at Chiang Mai, a relaxed, easy going authentic town. The guesthouse was run by a really tall, bold Thai guy, with the appearance and charisma of a monk. I actually think he is or had been one. His voice was so calm, that when he tried to explain me how to get to the Doj Suthep, I thought he was trying to put me in to a deep meditation. Hahaha The guest house had a real serene feel to it. A swimming pool in the middle surrounded by the cottages. A lot of green, plants and trees. Under a wooden on roof, a big army jeep was parked. The owner told me that only it’s exterior was old. The inside of the car was completely new. It was his hobby old timer.

I rented a scooter at the guesthouse to drive around town. The town is easy to get around. The city center is surrounded by one big road. So whenever I got lost on my scooter I just drove out of the city until I reached the big road and reorientate again. :-) One evening however it was raining. I waited until the rain was finished and then decided to take the scooter and go for something to eat, and may be watch a World Cup match. I sat on the scooter and even before I could turn on the engine I slipped on to the ground with the scooter. The ground at the guesthouse was that slippery. Luckily the scooter stayed unscathed. I wisely decided to leave the scooter at the guesthouse that evening. Besides the scooter, it is easy to take a Tuk Tuk or a Songthaew, a red pick up truck where you share the price with fellow travelers. This makes them the cheapest. I found out the hard way, taking the Songthaew all by myself and wondering why the driver was so happy. Hahaha.

The next day I went to Wat Phrathat Doi Suthep, which is a buddhist temple on top of a mountain. It was really special. I went there by Songthaew and after arrival I had walked the huge 309 step stairs up hill. When you finally arrive there you see one huge gold Chedi and people were walking around a special white flower in there hand. I joined them. After one round I left the path around the Chedi, only to find out that it is common to walk three rounds. I went back in there and I did the three times. :-)

After that I went to the Tiger Kingdom. It is said that you can hug tigers here. I had to go and see that. You could choose to hug a baby tiger, a junior or a really big one. Of course I went for the latter and of course I had to sign a disclaimer form. ;-) You arrive at the tiger area where you can see them from behind a fence. You wait until it is your turn and then you are allowed to step in to the arena. There were some rumors about the tigers being drugged, because people saw them sleep a lot. So I was a bit skeptic. However, these guys were active as hell. Jumping in and out of the water and playing with each other. There was no suspicion of them being drugged at all. I found out that these tigers were trained by humans from birth, so they are used to human touch. And it is normal for tigers to sleep during the day and hunt during the night. So of course some of them are sleeping. Hahaha. It was my turn! I was explicitly told not to touch their head, neck or front paws. I only thought by my self, what if I did? For example accidently?

I went in! One fence goes up, you step in and the fence closes behind you. Then a fence in front of you opens… and you… are… in… the… arena!!!

I now realized I was between one of, if not the greatest predators in the world. These guys were huge! One just walked past me over the edge of the pool, with an intimidating swagger walk. ;-) The keeper was looking for one tiger I could take a picture with. Some were still playing, some were just about to go in to the pool… “Come here, sir”, the keeper said. One tiger at the back was  just lying down. I got close to the tiger “No, not from the front!”, the keeper whispered “Approach him from the back.” I understood, I should by no means form any threat or whatsoever to the tiger. So I approached from behind and sat down behind the tiger. The pictures were taken, but then the tiger noticed me. He turned his head to me. Shivers went down my spine, but I kept on smiling. He then turned his head back. I gently put my hand on its stomach and could feel it breathe. This is awesome!! I’m here! I’m doing this! We found another tiger to take a picture with and also two tigers who were just relaxing. It was over before I knew it. Amazing experience! #epic Luckily I read about the multiple tiger attacks and accidents at these type of parks afterwards. Hahaha #angelonmyshoulder

Also in Chiang Mai I had to get my toe bandage changed. However on my way there I burned my ankle to the exhaust of my scooter. Really!?? Hahaha, Yeah really! Luckily I was already on my way to the hospital ;-)

My toes were still really hurting. After all the sightseeing and walking I wanted to go for some dinner two streets away. But I overused my toes so much that day, that I had to get a Tuk Tuk. The guy was like were you want to go. I was like: “There!” I could almost point at it! Haha

And I don’t know what it is, but in Thailand everyone wants to stand on my little or my big toe. In the airplane to Bangkok for example. I had my foot in the aisle for one minute and a guy past by, BAM!, stepping on my too. In Bangkok I asked for directions, the guy turned around to point the direction, BAM!, stepping on my too. It started to look like a real bad slapstick cartoon! Haha. I only needed my too to become ten times as big and beating like a pounding heart. Lol! But as I learned in Thailand… “Sabai, sabai” which means, no worry!!!