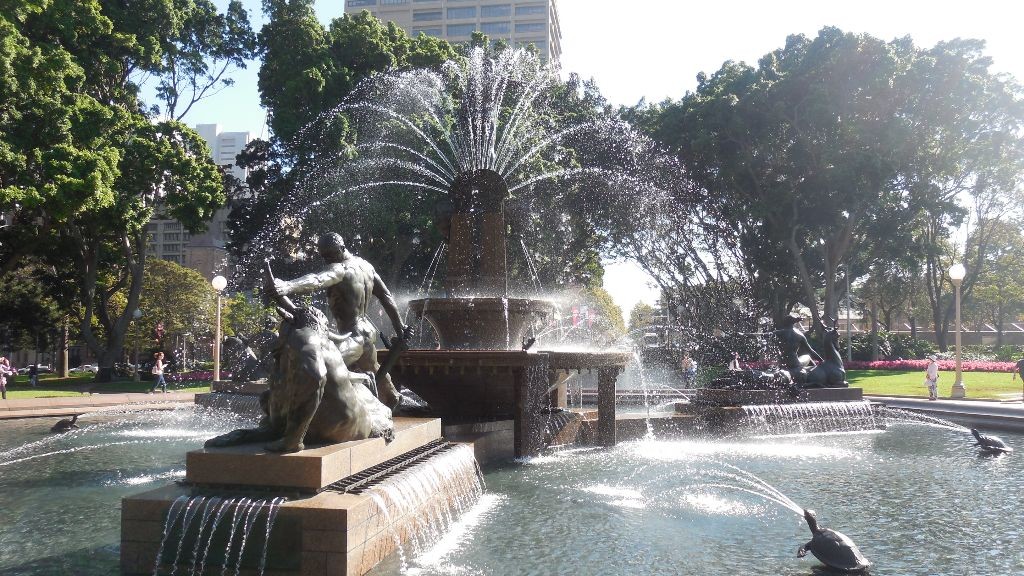 Australia, the land of kangaroo’s, aligators, wombats, the outback, great barrier reef and aboriginals. To be honest I put this one on my list because I wanted to do EVERY continent (Southpole excluded). Hahaha so my opinion was a bit colored. I landed in Sydney and was immediately attracted to the funny sound the traffic lights make when they turn green. It’s the sound of an 80’s Atari astroids laser beam Pieeuw-sound. Soo funny! Sydney has these little smart things that make you think, why didn’t we think of this. For example: When entering a train in the Netherlands most people want to sit on a seat facing the direction the train is going. In Australia you can ajust the seats to face the direction the train is going in. Just pull a handle to adjust the seat. Yeah.. readjustable seats, like why didn’t we think of that!?

I took a “Walking City Trip”, where you explore the city with a guide for two hours, who explains all about the history of Australia. It was nice! I got to see the Sydney Harbour bridge, the Opera house, the Sydney tower and much more. We also went to the well know Rocks district, where all the criminals from the UK where deported. The hood has a long, dark history but is nowadays the place for upscale restaurants and bars. You can even dine in a prison cell if you fancy that ;-) And of course the famous Bondi beach can’t be missed, so I layed around there for a minute.

I met up with an old classmate from the Netherlands. She and her friend showed me around town. We had a lot of fun. We went to smooth, 20th style burlesque bars and even ended up in a bar where they had tons of whiskey’s on the wall behind the bar which lit up by backlight. Like wauw! I regret I didn’t take a picture of that one.

After Sydney I moved north to Brisbane to visit a friend of mine I met in Brazil. It was a great reunion!! We catched up on great memories of Brazil and enjoyed Brisbane. We first went to the South Bank Night Markets and after that we hunted for toads and bats around the house hahaha, We went in to the Brisbane nightlife which was marvelous! Cloudland an extraordinary nightclub club and Brisbane’s premier lounge bar, where water was pouring down the windows and a live band played all the latest dance hits. Fantastic!! The day after that we decided to go to Dreamworld. I hadn’t been to an Amusement park in ages and was wondering if I could still handle the rides. As we entered the park we were all a bit nervous and started to walk more slowly hahaha. But it turned out to be great. I still got it! ;-) We did a lot of rides! I even went for the Tower of terror (the name says exactly how it feels) and to the inhall Zombie laser game haha.

The laser game was funny. Of course I was first of my group (brushing my shoulders off, while saying this ;-) Yeah, Brisbane was cool! We had a real fun time and good laughs!

I left Brisbane to head even more to the North to Cairns. The portal town to the Great Barrier Reef. In Cairns there is not so much to do really. It even has a lagoon called “Cairns Esplanade Swimming Lagoon” next to the coast, which I don’t understand. You see the sea which is completely empty and next to it a lagoon with people swimming and having fun. It looks a bit awkward haha

In Cairns I hung out with another friend of mine which I met in Brazil. She told me Ozzy, the little devil dog from the hostel in Brazil which we loved to hate, just died. He got hit by a truck. R.I.P. Most of the people I meet here are doing a working holiday for a year. They work in farms or restaurants and pay for there vacation that way.

In the Netherlands I got compared to this guy from the T.V. A now famous comedian called Jandino. On the streets, at parties in the supermarket, everywhere I hear people say “Hey that’s Jandino!! Is it?” I finally got rid of this by travelling the world. May be it was the main reason for me to travel the world hahaha. But in a club in Cairns I suddenly heard someone scream: “Heey, Jandino!!!” Never thought it would follow me all the way to the other end of the world… it was a drunk dutch guy… off course. *sigh* hahaha

At one of my afternoon strolling around Cairns I heard a lot of birds squawking but didn’t pay no real attention to it. Then when I walked under a set of trees I saw a guy, that was approaching me, looking up at the trees and immediately jump off of the sidewalk. Curious as I am I also looked up and understood his reaction. The sound was made by hundreds of bats hanging from the trees. Really hundreds of them! You could see their eyes starring at you. And the ground beneath the tree was filled with bat poo. Amazing!! I took some pics, but was quick to leave the sidelane too, because I didn’t want no bat doodoo on my head.

The next day I went to the Great Barrier Reef: The only living organism that can be seen from space. And I was going to dive the Great Barrier!! There was a little problem however. My last diving experience was in Turkey almost 10 years ago. It didn’t go very well. To keep a long story short, I almost drowned because my oxygen tank was only half full. So you can understand I was a tiny bit nervous. Still really tired from the night before, I got on a boat which was really fighting the waves, going up and down. They even supplied people with “boat sickness” pills by default. We stopped at the reef after almost an hour of sailing. We were divided in to diving groups. And while waiting your turn you got the time to do some snorkeling. So I did. And it was nice. But then it was time for the real thing. I put on my diving suit, spit in my diving glasses (as I was told to do), washed it off, put it on and waited on the side of the boat. The instructor put on my tank, gave some instructions and stressed that we really followed him and off we went…. one word… amaaaazing!!! I immediately forgot my whole Turkey experience and enjoyed the beauty of the reef. I saw a lot of beautiful creatures and colors. A Maori wrasse also known as the Napoleon fish, a big blue fish, just swam past me. I could even touch it with my hands, because it is not afraid of humans and it even likes to be touched. The most strangest thing I saw under water was when my hand touched some coral. The coral had some beautiful, bright, blue flowerlike things on it, but as soon as I touch the coral these blue flowers quickley nside. The flowers where actually Christmas Tree Worms. Wow!

Off course I can’t leave Australia without having seen any Kangaroos…. in a park however. Hahaha. But I got to feed ‘m and saw even more animals like the Southern Cassowary, a large, aggresive, colored bird which looks like a prehistoric ostrich. Furthermore I saw aligators, wombats and other typical Australian creatures. Oh yeah, and I didn’t know Pelicans where such fun creatures. I ended up watching them mesmerized for half an hour. Hahaha.

It’s funny how foreigners love Kangaroos, but Australians don’t. They are to them what pigeons are to us. Imagine a tourist in Amsterdam taking pictures of the beautiful pigeons. Hahaha. It’s because they terrorize the farms and even form a plague. Actually most Australians just hate the damn Kangaroos. I gues Skippy did some good PR for the Kangaroo sociaty ;-) Hahaha

Just before I was leaving Cairns, news messages started popping up, about a cyclone by the name of “Ita” that was going to hit Cairns. It was already a level 5 cyclone. And for your imaging, Katrina was a 5. I even got a text message on my local Aussie phone saying: “It looks like Cyclone Ita will come close to your area. If your service is interrupted, you’ll still be able to make emergency calls to 000”. I could feel the panic just before my departure. The super markets where empty, because all the people where hoarding. My flight back to Sydney was cancelled and I was put on another flight that would leave four hours later. The day I left, the streets where full with sandbags and the airport was crowded. Luckily I managed to get out in time. It reminded me of the fact, that an earthquake happened in Chile just one day after I left. I was also lucky to be out of the country on time. I must be having an angel on my shoulder. Actually I literally do ;-) Eventually Ita would turn out to be a level 1 cyclone, because it weakened as soon as it came to land.

I stayed in Sydney one more day before I headed for Japan. I decided to see the Blue Mountains and the Three Sisters. My plane was leaving that same day. The guy from the Hotel told me it would be two hours from Sydney to the Katoomba station from where I could go to the Blue Mountains and two hours back. He didn’t calculate the waiting time when you just miss all your connections. It took me three hours to get there. Then I rushed off to the Blue Mountains. It was quite cold there. I took a moment to experience the three sisters and live in the now, then I took some pictures “Smile” hahaha and had to get back as soon as I could to not miss my plane. More so, I had to make it to the next train to Sydney which would be leaving in half an hour, otherwise I would miss my flight. I saw the bus and confirmed with the busdriver that this bus was going to the Katoomba station. The busdriver a world-weary guy slowly and without any real involvment replied: “Yes, eventually we will get there.” That was all I needed. I hopped on the bus and while sitting there the busdriver suddenly started speaking over the microphone, telling us about things we could see on our left and right hand side…. it was a sight seeing bus!!! Fortunately this one would make it in time, but I have never had a more nervous sight seeing in my life ever hahaha.