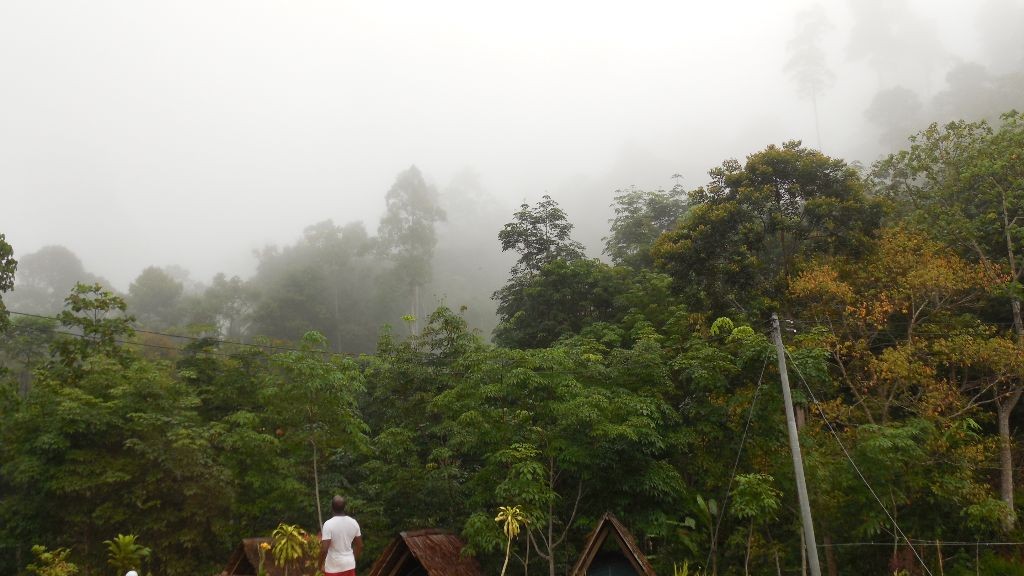 Kota Kinabalu, the gateway to Sabah bearing the same name as the big Mount Kinabalu which I would optionally want to climb. I booked an accommodation in Kota Kinabalu and took a plane from Kuala Lumpur to Kota Kinabalu. From the airport I took a taxi to the place. It was raining and the clouds were grey. We arrived at a compound with a series of beige, brown flat complexes. It looked like a normal residential area in the middle of town. This had nothing to do with a hotel, an apartment or even any form of tourism. “Here it is”, the driver said. I was sure this could not be the place. We got out, I looked around. There was just this flat with a porch. It was actually the right address. I asked the driver to wait for me as I would go up and see if there was something going on at that house number. As I took the elevator I met some people who were living there, but none of them knew of any apartment or hotel. I saw a door with the number on my address, protected by a gate, but no sign of life. I went back down stairs and asked the driver if we could call the owner. We did. A happy girl picked up. “Oh, you are already there. Great! I’m on my way. If you want to go in, the code is 1211. I’ll be there in a sec!” I hung up, thinking: “This is the right place!?” The driver left and there I was in Kota Kinabalu, in a residential area in the middle of nowhere. I didn’t know where to use to code I had just been given, and since I don’t have a phone of my own I decided to wait. Within 5 minutes Precilla arrived. She let me in the appartment and to be honest it was awesome. Nice, clean and shiny. Then I got the explanation. She and her boyfriend used to live in this apartment and now they rented it to pay off the mortgage. I got it!!! The apartment had three rooms. One for each guest. I was the only guest, so I had the whole place to myself. Hahaha Not for long though, because a Dutch couple would arrive later on. I went out to do some grocery at the supermarket nearby. I was seriously the only tourist and for a second I really felt like a local. Going back to my apartment, in some neighborhood, in Kota Kinabalu in Malaysia.

I wanted to do a serious Jungle trekking and may be climb the mount Kinabalu. Through Precilla I quickly found out that the mountain climbing wasn’t going to happen. You had to book that one way in advance. However the Jungle trekking was possible.

I did the Jungle trek together with a Dutch couple, who also arrived at the apartment later on. They had rented a car, so we drove to the spot with the three of us. The only difference is that they would return the same day and I was going to stay the night.

The way to the place took us more than two hours. At one point we were driving up hill, our ears started to pop because of the altitude and the car struggled to get up the hill because of the steepness of the hill. After some searching and calling the owner back and forth, we finally arrived. What a view!! Jungle, jungle, jungle. The owner had a base camp situated in the midst of the jungle. The owner’s name was Inas. A small, cheerful guy, that looked like mr. Miyagi from Karate Kid and claimed to be chief of over a 100 villages. We were now looking at the oldest rainforest in Borneo, covering  96966 Km2, twice the size of Singapore.

The Jungle trekking was awesome! We drunk water from a liana and learnt a lot from Inas about survival in the jungle. The lianas of rubber trees for example are poisonous. So is everything that has bright colors or glows in the dark. Yeah, really some things here do. He showed us glowing mushrooms on a stump. He also told us that when they hunt, they made sure that the wind is not blowing towards their prey, otherwise the prey will smell them. Another tip he gave us is about getting lost. If you get lost in the jungle look for broken twigs, this is a sign of a beaten path, regularly walked by humans which could also bring you back to safety. Another tip is to follow the stream to the river, which mostly lead to a village. Most villages are built alongside a river. I loved it! Even the bloodsucker on my leg, which made my blood flood like hell. It seemed these little creatures have a substance in their saliva that dilute your blood so it keeps on flowing. This substance is also used for blood thinners.

We got back just before rainfall. When we returned we saw a big rhino beetle, and played around with it. We also tried to burn the Kamayan stone we found during our trekking. It smells like church incent. We ended up at a local pub eating wild hog, drinking local rice wine and singing karaoke on Una Paloma Blanca, the Bee Gees and the Beatles. Inas did not want to leave! Hahaha. Because it was a local custom that you can’t leave before the bottle is empty, they even gave us the bottle to take with us. Hahaha.

The evening was filled with all sorts of jungle sounds. I slept alone in my tent and was the only visitor, because the Dutch couple had left that evening. The next day Inas asked me to join him to a local wedding. Before we got to the wedding we went on to feed some Koi Cup of Palain. The pond was full of these fish. He gave me a fist full of food and as soon as I stuck my fist in to the water the all aggressively crowded around my hand to eat the food. Hundreds of them! A unique experience! It was an honor for the bride to have an international guest, so they were really pleased with me signing the guestbook. Everybody seemed to know Inas. He really was the chief. We drank to the wedding screeming “Aramaiti” which means: “let’s party and cheers!”

When we got back I wanted to do another Jungle trekking. Inas was convinced I could do it on my own. “Just go down until you reach the river, we passed yesterday. Don’t pass the river and walk back. It will take you like half an hour. If you don’t come back in an hour I will come and find you” It now seems pretty dangerous, but somehow at that moment it sounded like a good plan. I walked the pad down with a stick I found along the way, feeling like Rambo. I quickly reach the river and was in such a nice modus that I decided to cross the river. Wrong decision! After a while everything started to look the same and I realized I was lost. Even the way back was impossible to find. I tried several routes but ended up coming back to he river crossing. Now and then a big fly flew by that makes a growling noise like animal. So each time it flew by, I thought a jaguar or another large animal was near. Damnz!! Panic! I even realized I didn’t have a mobile phone with me. Then I remembered Inas’ lessons. I sat down. Calmed myself and looked for broken twigs. This helped. I soon discovered my way back to the camp. What a relief!! I was all sweaty and out of breath. I told Inas what happened and saw a shimmer in his eyes.

I took the bus back to Kota Kinabalu where I arrived at the apartment in the night. I was tired, wanted a warm shower and something to eat. I found out the door of my room was locked. I called Precilla and soon discovered she had given away the room because of a miscommunication. She thought I only wanted to leave my backpack behind and would pick it up after the Jungle trekking. I had to find a place to stay now! Damn! I repacked myself, quickly found another place to stay and she arranged me a taxi. It is funny how your mind set can easily adjust during a trip around the world. I arrived in a real nice hotel.

In many countries I get compared with someone, but in Malaysia I got the most unique comparison of all. Michael Jordan! A guy stepped up to me, saying: “Wow! You really look like Michael Jordan” Really!?

Before I left Kota Kinabalu I wanted to post a letter. I tried to explain the cabdriver, who did not speak any English that I wanted to go to a post office to sent my letter. I made a gesture of a stamp on the envelope, then made a gesture of a flying plane to indicate that I would like to sent the letter. He understood and started driving. Underway I started seeing signs of an airport. Luckily I intervened on time. He almost drove me to the airport :( Hahaha