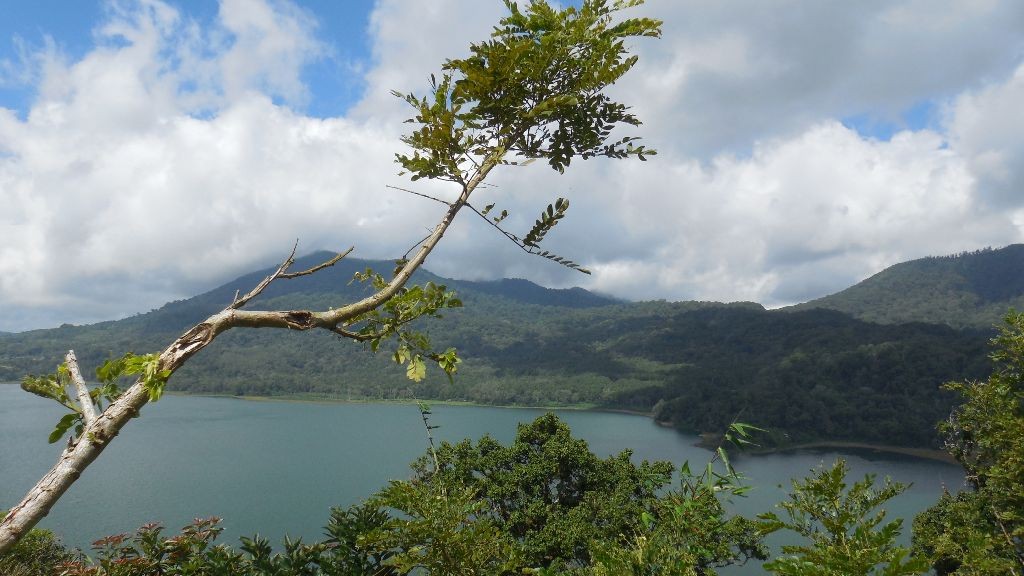 The next day I went with a driver to do some sight seeing. We did a coffee tasting north of Bali. There I tasted Coconut coffee, Vanilla coffee, Ginsen coffee, Balinese coffee and also some teas like Lemongrass tea, Ginger tea, Tumarec tea, Mangosteen tea. The Ginger tea tasted like Surinam “Gember Bier”, but then warm. I tasted some Rosela  and some real chocolate cacao without sugar as well. And believe me, whithout sugar it has nothing to do with the chocolate milk as we know it hahaha. All of the substances were good for some part or organ of your body. One type of coffee was good for the heart another type of tea was good for the stool, yet again another one was good for the blood circulation etc. I guess I am a very healthy man now. Lol! But… the main character of the coffee tasting show, was… the Luwak coffee. The Luwak, a cat-like creature, selects the best berries to eat, in his stomach enzymes seep into the beans, it then poops out the beans and they make coffee out of that. Luwak coffee, unlike the Balinese coffee has low caffeine, but still Balinese coffee tastes like water after you drank the Luwak coffee.

We visited Bedugul where we went to the Pura Ulundanu Beratan Temple. The Tree scandia (Balinese singing) on the background gave it a special feel. I noticed that all of the temples in Bali have a splitting gate. Like the entrance is made out of one piece of stone carving, which was then horizontally split in half to create an entrance. I asked the driver about this. He explained me that it has a symbolic meaning. When you pass the splitting gate, you also have to split your personality in the good and bad side. And leave your bad side behind. Many entrances to buildings have this type of gate and even each village has one. Wow! Impressive!

We went to Munduk a place you visit only for the view, but did I say only!? I fel in love with the view. Green hills and rice terraces. We drove past clove and mango trees on the way and each view is more beautiful than the other. I will definitely come back to this one.

After that me and the driver were getting a bit hungry and wanted some Satay. According to my driver the Goat satay was the best. Kambing as they call it. We didn’t managed to find a place were they sold it, but because we were close to the Banjar Hotsprings I decided to first plunge in to the natural Banjar hotspring and look for the satay afterwards! It was nice! I saw this one in travel programs a lot. Funny to actually be there now. After that we continued our search for satay. The driver told me to look for smoke. As we were driving up and down hill through villages, we focused for any signs of smoke alongside the road. At this point we both had one common goal: Satay! Haha. Finally I saw some smoke. Satay! Unfortunately we had to settle for chicken Satay, but it was no punishment, actually it was really good. The only thing I noticed is that the satays here have tiny little meat on them. So even after ten satays a was left still a bit hungry.

Next stop, the Git Git waterfalls. The driver informed me that there was a guide at that place who would bring you to the waterfall, but you had to negotiate the price with him. I asked him what was like reasonable. He said 100.000 is too much. As soon as I put my foot on the ground I was approached. This guide offered to show me all the three waterfalls for only 150.000 each. So this means 450.000!? And wasn’t there only one waterfall? Wow, this guy was really insulting my intelligence Hahaha. After some firm negotiation he offered to show me two waterfalls for 100.000. Then I figured that I came to see the one big waterfall and you can’t even swim in the other one. I finally said I’d do one for 50.000. He said 80.000 for one, which was still far from reasonable, but to cut him some slack and to contribute to the village I went for 70.000. When he walked me to the waterfall he smiled. “It was a good choice to only do the one waterfall”, he said. “The others are small and not even really nice.” Like really!? Can you believe this guy!? Hahaha. The waterfall was amazing though. I jumped of the rock in to the 5 meter deep pond beneath the waterfall. Went swinging on a rope to release it at its peak and fall in the water. Lol! Crazy, childish, but fun!

Later on, we saw another smoke surrounded stand. Satay! And this time it was the Kambing satay! Jeej! ;-) The driver waited around the corner and I went alone to order the satay. We were in a remote village and the stand was run by a few teenagers. Probably the children of the owner. They were really surprised when I ordered, and giggled the whole time. They didn’t understand a word of what I was saying, found my accent funny, but understood that I wanted 20 satays. They showed me the price on a calculator, giggling again. And then when I left, one of the boys said in a bit nervous, but clear manner: “Thankuu ferry mutsj!” and the others chuckled loudly. Proud at their brother that he just spoke English with a falang! Hahah. Funny! And the driver was right, it was really nice! But to be honest, I like the chicken more. Hahaha. We stopped at one of the rice terraces along the road. The driver had explained me all about the rice terraces, how they needed large sums of water at the beginning when they are still young, how the water dries up later. He also explained what the flags were for, which you see on all the rice terraces. The flags were all connected to a system of threads. Sometimes a flock of birds or a swarm of insects attack the rice terraces. When this happens, the farmers pull the main thread so all the flags start moving, thus scaring the birds or insects away. Pretty genius! And because he had promised me to show me how the rice really looks like when it is growing, he stopped here. We took a stem and he showed me the rice inside the sheaths and explained me how they use machinery these days to extract the rice. In the past, they used to smack the stems against the ground manually, to get the rice out. And finally he told me about the Arak which is an illegally, local brewed ricewine.

On our way back, I played some relaxed Jazz music, while I was content fatigue, I saw a few kites in the air, the sun was setting while we drove alongside rice fields and other beautiful landscapes and I was thinking about my trip thus far. It has been more than I could ever dream of. If you asked me what I would have liked to add to it, or what it lacked I couldn’t name anything. The perfect ingredients. I felt really thankful!

We arrived near the hotel. I went to eat at my favourite restaurant with the slowly wabbling lampions. I tasted pisang goreng (fried banana), which I know from back home, but with grated cheese. Strange combination, but really nice! At the restaurant I also tried their famous black bean rice pudding, which is also lovely. Hmmm, my mouth starts to water again as I am writing this.

After diner I went to a traditional Kecak Fire and Trance Dance performance in Pura Taman Sari, performed by the group Sandhi Suara. The performance was held in an open air temple by night. I didn’t understand a word, but still I could follow the story a bit. At least I knew who the villain was. Haha. At the end they burned a pile of coal until it was glowing. Then a man with a stick horse circled around the pile of coal, supported by load singing. He then suddenly kicks the pile fiercely in to the audience, making blocks of coal just come to a stop a few centimeters in front of my foot. Of course I was on the front row and of course I was wearing short pants and slippers. Hahaha. They scraped the still glowing blocks of coal together until the pile flamed again and turned in to a glowing heap. Then the man with the stick horse repeated his kicking again. They did this like five times and each time the audience anxiously waited not to get burned. One time a female in the front row had to jump up however, otherwise she would surely got burned I think! Like wow!! #noregulations I still loved the show though! Amazing experience!

Back to Kuta. I planned on going back to the great Hotel I stayed in before. The owner told me just to call him one day in advance and he would make sure I had a room. No need for Booking.com So I did. Done deal! Only the morning I left for Kuta I saw I had a txt message from him saying, he forgot to check the availability and that there was no room and at thousands of sorries. What!? So I got of the bus, arrived in Kuta, the bus left and there I was with my backpack and daypack and no place to stay. I quickly arranged a new hotel, which was ok. I stayed in Kuta for two more nights and then it was time to head for… Singapore!!