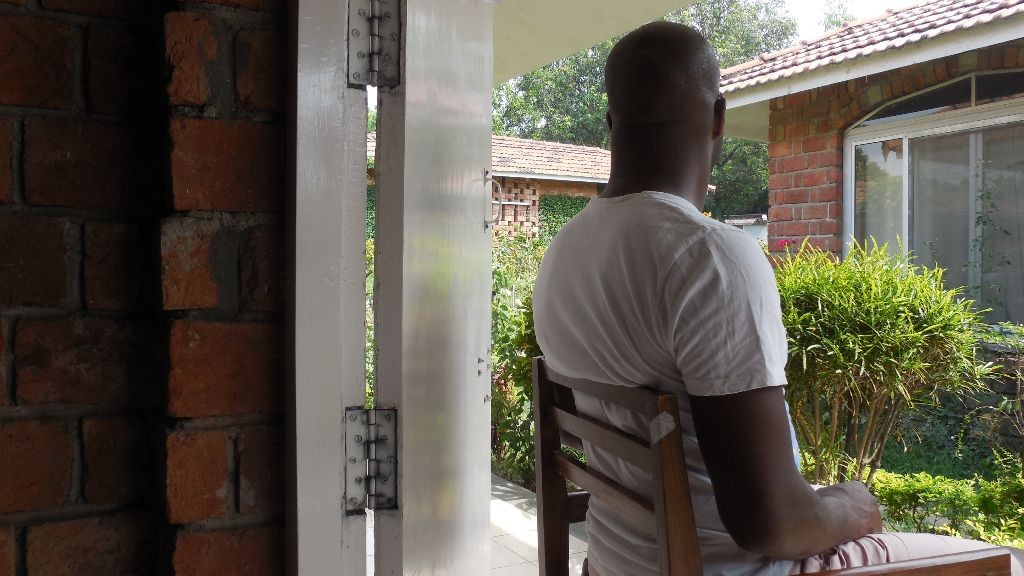 I took the train from New Delhi to Rishikesh at 5 o’clock in the morning. Rishikesh is situated along the holy river Ganges, about 200 kilometers northeast of Delhi sitting at an elevation of 330 meters, it is considered the doorway to the Himalayas. The Rishikesh area is considered to be sacred as it is believed that meditation at this place leads to the attainment of salvation. There are many temples, some ancient, some new in the Rishikesh area. And for the record Rishikesh is also the place where the Beatles wrote their “White Album”.

I was going to stay in an Ashram to do a 7 day silent retreat, meaning no talking for 7 days. A guy from the Ashram picked me up at the station. When I got off the train I saw someone standing with my name on a plate. You see this on many train stations and airports. It’s quite normal, but to suddenly see your name on a plate between dozens of unknown Indians after an exhausting train ride is still somewhat awkward. Haha. We drove on a bridge across the Ganges river, which Indians call the Ganga, and arrived at this beautiful Ashram. The Ashram looked like the way people depict paradise in images. It had a collection of cottages, surrounded by a perfectly maintained pittoresque garden with a view on the mountains. Wow! I stayed in cottage number 10, in the midst of the premises. The cottage had a kitchen, a bathroom and two bedrooms. The wall was made out of red stones, which gave it a monastery feel. I thought I had the cottage to myself, but I was not alone. I was kept company by ants, crickets and other small unrecognizable creatures on the floor. The walls where full of jumping spiders and I even had a permanent roommate underneath the sink closet, the gecko! He sometimes appeared quickly from under the sink closet to sunbath for a few minutes next to the window.

The Ashram was established by a famous Swami. And what makes this Ashram stand out, is that they mix spirituality with science. Coincidental the Ashram also had a link with Surinam. The swami had lived there for years. And the Indian people in Surinam brought the Himalaya yoga, as it is called, to the Netherlands. Funny! So when they heard that my roots where in Surinam everyone got excited.

I was welcomed by the head of education. Before I could do the silent I had to follow a three day course about yoga, meditation, diaphragmatic breathing and more. He asked me my name. “Frans”, I said. He didn’t understand how to pronounce it. I told him “It’s easy, just like the country, France.” “Ooooh, now I understand. France!!”, he said. He explained me about the Ashram. I had to follow a strict daily program which consisted of morning prayer at 5 o’ clock, Joints & Glands Exercises from 5:15 to 7:00, Breathing practices from 7:00 to 7:30, Meditation from 7:30 to 8:30, Breakfast from 8:40 to 9:30 etc. etc. the program ended at 9 o’ clock in the evening. Like.. wow!! He recommended a good book to read before my silent. As if I had enough spare time with this program Haha. I could borrow the book from his library. He would write my name down, so he would remember who had the book. And then I seriously saw him writing down my name as “Spain”. Lol!! Hahaha I told him it was the other country Hahaha.

The next day we started with the morning prayers and after that we did the Joints & Glands exercises workout. The teacher spontaneously improvised by starting with a fast paced walk through the area. We followed and all giggled because it must have looked really silly, but on the other hand walking like that through this magnificent place full of lovely nature, singing birds and a view on the mountains while the sun is slowly rising also feels special. I loved the hatha yoga classes in the afternoon. During the hatha yoga classes I also found out how stiff I was hahaha. I just couldn’t get the lotus position right. During the evening meditation we sat in that pose for one hour. I needed two extra rolled up blankets for support hahaha.

Breakfast, lunch and dinner were consumed at fixed hours in the dining hall. The food was completely vegetarian. Not even chicken or fish. Ah well.. you get used to it. One day we heard someone running over the plastic, corrugated roof of the dining halls’ outbuilding, which made a real loud noise. Everyone stopped eating and stared. Who was that!!!? We found out it was a large Macaque. Wow! The culture shock keeps continuing ;-) Hahaha.

I met with the swami who would be my mentor during the silent. He told me that as a newbee I could do a maximum of three days silent. I was shocked! I told him that I had planned to do a seven day silent. He laughed. “Most beginners crack in to tears after two days”, he said “but ok… let’s first start with three and then see if you can handle more.” People who know me, know that telling Frans he is not able to do something is the best way to make me really want to do that something. I said: “Ok” However… I thought: “I’m definitely doing the seven days!!!” Hahaha. We talked a bit about the silent retreat. He told me I should have as less distraction as possible. This meant keeping reading and writing to a minimum. Keeping a small log and reading for an hour a day is ok, but no more than that. And also if I really needed to communicate with him during the silent, I could do so by paper. Also I didn’t have to follow the strict program when in silent #luckyme. I saw some people in silent walking around in a white Khadi, so I asked him about the dress code during my silent. He gave me the best answer possible: “Just be your self. Come as you are” We agreed that my silent would start at 6:30 the next morning.

The day before my silent it was a full moon and it felt kind of special.

The first day went well, pretty easy even. I only had to suppress some sounds  one makes out of a habit. I followed the hatha yoga classes and attended the evening meditation and sat alone in my cottage for hours. Just me and my thoughts, knowing the next 7 days I wasn’t going to communicate with anyone. Also the prediction of a nervous breakdown on day two or three was hanging above my head, but I was determined!

The second day I was prepared for any surprise. I’ve been told a crying fit could emerge out of nothing, but when the Swami saw me that day at the dining hall, he walked up to me. “I can already see you are strong enough. Go for the seven days! I will be out of town and will be back the day you are finished” I’m not sure if he told me to go for the full length because he saw that I showed no signs of breaking down or because it came in handy for him and his agenda. Lol! Hahaha. Either way I was going for it!

Eventually the surprise came… but not in the form of a crying fit. The toilet tap in my bathroom sprung causing a little flood in the bathroom. I was like.. Really!? Now!? I kept calm and managed to shut down the main tap. After a few hours I could open the main tap again and everything was back to normal. Luckily! That night a incessantly stream of birds were flying over from the Himalaya’s. It must have been thousands of birds, because it took for ages and it was real special and calming to look at.

I was getting used to not talking. I did my daily yoga, having a tea with milk and sugar prior to it, eat three times a day, did some contemplative walking, meditation and returned to my cottage. I started paying attention to my room mates ;-). The ants were my flour cleaners. I saw them moving a piece of peanut, I accidently dropped on the floor, all the way to their shelter. Me and the gecko beneath the kitchen sink, became friends Hahaha. I stopped chasing him, instead just let ‘m get his sunshine now and then. He would go after the flying spiders on the wall for me. A cat showed up at the porch of my cottage. I gave it some food. It kept showing up almost each evening.

The cottage had a peaceful feel to it. Also at night. It is quite an experience, alone with your thoughts and no one to share them with. The thoughts keep on flowing. Long forgotten memories show up.

After a few days I was really at peace. My mind was empty. I lived in the now. It felt like a vacation in a vacation. This sounds crazy, but during this trip I have constantly been busy arranging flights, hostels, laundry, sight seeing, getting to know the next city, meet new people, exchange new currency etc. most of it really fun, but still exhausting at times. Now I just did… well… nothing. I only had to make sure to sleep, eat and drink, do the laundry and follow some classes. But it wasn’t all a bed of roses. I also felt real homesick at times and after all these days of vegetarian food I was craving for a medium tenderloin steak soooo bad!! (I told no one, because they would kill me, especially in the land of the holey cow!). But still… these were just relatively minor inconveniences.

Every night there was something going on, on the banks of the Ganges. Chanting, drums, people. I could hear it in the distance, while lying in my bed, but I could not go there because I was in silent and mostly it was for local people. One day I did however went for a long walk of a few kilometers to the befriended Ashram. It was really relaxing. Only when a guy on a scooter started talking to me it took some time for him to realize I was in silent. He first thought I had some hearing problems. Awkward situation!

The seven days went by fairly quickly. I learned a lot during the silent and I would advice everyone to do it. I only sinned one time, when I couldn’t catch any sleep and then suddenly a mosquito started to zoom in my ear. I cursed at the mosquito, whispering, but not even finishing the word. That was the only sound I had made during those seven days. No nervous breakdowns, no crying fits… guess I’m pretty balanced emotionally :-) Hahaha.